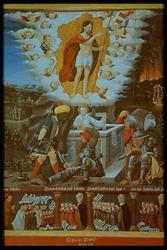 In 1569 und 1574 the publisher Andreas Franck in Graz printed a Gesangspostille (Picture) by Andreas Gigler, the city parish priest in Graz. This is the oldest known musical work printed in Styria. This no songbook in the traditional sense but rather a collection of rhymed strophes from the Gospels with an appendix with melodies. Twenty chorale melodies were set for four voices by Johannes de Cleve, the court chapelmaster at that time in Graz, - half of them based on Protestant chorales! It may seem strange to us today that such a work should be somehow a mixture of the two religious camps (cf. J. F. Fritzius) but in those days, the differences were not so clearly defined and anyway it remained common for a long time to use the motets of Catholic composers in Lutheran church services. Musical example: Aus tiefer Not lasst uns zu Gott aus ganzem Herzen schreien on a Melodie by Johannes de Cleve. (E. Stadler)