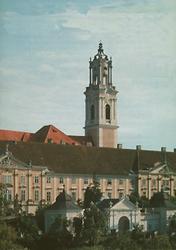 Georg Josef Donberger (1709 Bruck an der Leitha /Lower Austria - 1768 Herzogenburg/Lower Austria) is one of many composers from monasteries, who have been ignored by music history although they had a decided influence on musical life in Austria in the 18th century. Donberger received his musical training at the Jesuit College in Vienna, which he attended starting in 1720. After finishing that school and studies in philosophy, Donberger entered the Order of the Augustines in Herzogenburg in 1728, where he became Regenschori. Along with Johann Georg Zechner and Franz Ignaz Anton Tuma, Donberger counts among the most importan Austrian composers between Johann Josef Fux and Joseph Haydn The motet, Cantate Domino canticum novum is the Offertorium for the feast of All-Saints. The picture shows Herzogenburg monastery near St. Poelten/Lower Austria. (E. Stadler)