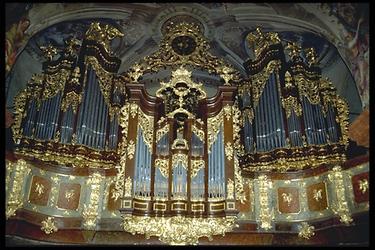 The early years and therfore the musical education of Johann Georg Zechner (1716 Gleisdorf - 1778 Stein a. d. Donau) are not documented. The only thing we can say is that he left home early to go to Lower Austria and that he was already a trained musician by this time. Zechner witnessed the blossoming of culture in the days of Emperor Charles VI but on the other hand, he also lived through the period of the Wars of Succession which saw much musical patronage shift to the rural aristocracy and the monasteries. We can observe the change from Baroque to Classic very clearly in his works - particularly in the way he used instrumental solos, especially with the organ. The Grosse Orgelmesse in C (Large Organmass) of 1761 became quite famous for its obbligato organ part in all of the movements. (E.Stadler)

Picture of the organ in the pilgrimage church, Maria Taferl, which was made by the famous organ builder, Johann Henke (1697 Geseke)