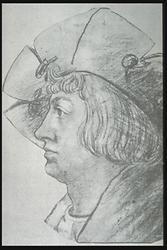 The illustration shows Ludwig Senfl (ca 1486 Basle - 1542 Munich), who studied with the famous composer, Heinrich Isaac. He served Emperor Maximilian I as his court composer and after the emperor's death, Duke Wilhelm IV of Bavaria. Senfl probably composed the song Lust mag mein Herz for the wedding of Louis of Hungary to Maria of Habsburg, a granddaughter of Maximilian (1515). The work not only refers to the wedding but also includes a hidden acrostic (in this case, the first letters of each line read as a whole) of the names Louis and Maria, (E. Stadler)