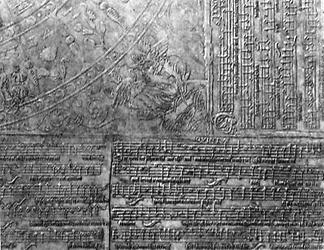 Orlando di Lassos (ca 1532 Mons - 1594 Munich) German song for five voices Der Wein der schmeckt mir also wol was first printed in Munich in 1567. Michael Holzpecher engraved it in a stone tabletop in 1589 (Picture). The Bavarian-Austrian double coat of arms between the lines of music is a reference to Archduchess Maria, the consort of Archduke Charles II of Inner Austria/Graz, who came from Munich. Orlando di Lasso was employed in Munich by Maria's father Duke Albert of Bavaria, which explains his presence along with the musicians of the imperial court chapel and those of the bridegroom at Maria's wedding to Archduke Charles in Vienna in 1571. (E. Stadler)