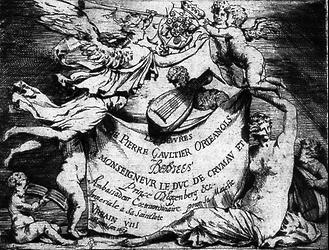 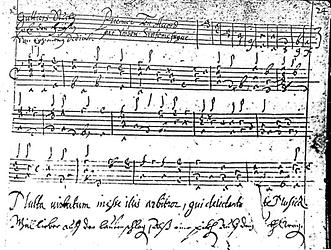 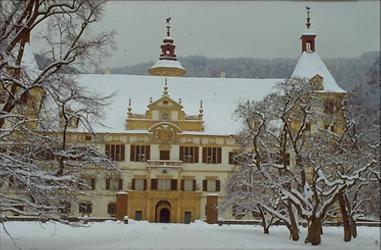 Pierre Gaultier (1599 Orléans - 1681 Caen) came from a middle-class family and entered the Jesuit monastery in Orléans when he was 22. He was sent to Rome as a part of his training where he met the dedicatee of this piece for lute in 1638. Prince Eggenberg was there for the inthronisation of Emperor Ferdinand III. With the financial support of Prince Johann Anton von Eggenberg he was able to have his Oeuvres printed which explains why they are dedicated to him. The first picture shows the Frontespiece of Les Oeuvres de Pierre Gaultier orléanois, which was published in 1638 in Rome. The second one shows the French Lutetabulature (Kremsmuenster L 81) of the musical example. This form of notation uses letters to show the frets on the instrument; rhythmic and other symbols indicate the length of each note, embellishments and fingering. In the third picture Eggenberg Palace (built 1625-55) is shown as it is today; it was the main seat of the Eggenberger family and now the district of Graz is also named after it. (E. Stadler)