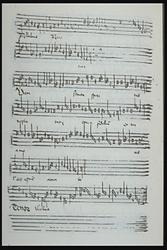 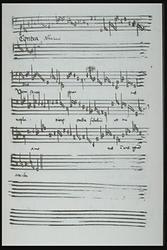 The 7 manuscripts known as the Trent Codices were written in two different chronological periods: the older ones have the signatures Tr87 und Tr92; the newer ones are Tr88-91 und Tr93. The first group was probably collected and copied by Johannes Lupi; the second group by Johannes Wiser. The pentacostal Sequence Alleluja, Veni Sancte Spiritus is taken from Tr88 fol. 117v-118r, which was written between 1456 and 1462. Sacred music fills the largest part of the collection; French and German songs or instrumental works are rare. Even today there are still many unresolved aspects about the Trient Codices but at least we can definitely say that they were not designed as a part of the local repertory in Trent because they only minimally conform to the local liturgy of the 15th c there. (E. Stadler)