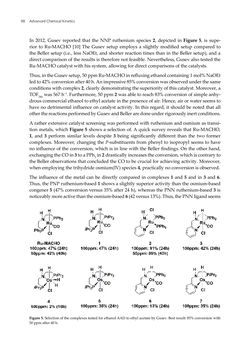 In 2012, Gusev reported that the NNP ruthenium species 2, depicted in Figure 5, is supe- rior to Ru-MACHO [10] The Gusev setup employs a slightly modified setup compared to the Beller setup (i.e., less NaOEt, and shorter reaction times than in the Beller setup), and a direct comparison of the results is therefore not feasible. Nevertheless, Gusev also tested the Ru-MACHO catalyst with his system, allowing for direct comparisons of the catalysts. Thus, in the Gusev setup, 50 ppm Ru-MACHO in refluxing ethanol containing 1 mol% NaOEt led to 42% conversion after 40 h. An impressive 85% conversion was observed under the same conditions with complex 2, clearly demonstrating the superiority of this catalyst. Moreover, a TOF24h was 567 h −1. Furthermore, 50 ppm 2 was able to reach 83% conversion of simple anhy- drous commercial ethanol to ethyl acetate in the presence of air. Hence, air or water seems to have no detrimental influence on catalyst activity. In this regard, it should be noted that all other the reactions performed by Gusev and Beller are done under rigorously inert conditions. A rather extensive catalyst screening was performed with ruthenium and osmium as transi- tion metals, which Figure 5 shows a selection of. A quick survey reveals that Ru-MACHO, 1, and 3 perform similar levels despite 3 being significantly different than the two former complexes. Moreover, changing the P-substituents from phenyl to isopropyl seems to have no influence of the conversion, which is in line with the Beller findings. On the other hand, exchanging the CO in 3 to a PPh3 in 2 drastically increases the conversion, which is contrary to the Beller observations that concluded the CO to be crucial for achieving activity. Moreover, when employing the trihydride osmium(IV) species 4, practically no conversion is observed. The influence of the metal can be directly compared in complexes 1 and 5 and in 3 and 6. Thus, the PNP ruthenium-based 1 shows a slightly superior activity than the osmium-based congener 5 (47% conversion versus 35% after 24 h), whereas the PNN ruthenium-based 3 is noticeably more active than the osmium-based 6 (42 versus 13%). Thus, the PNN ligand seems Figure 5. Selection of the complexes tested for ethanol AAD to ethyl acetate by Gusev. Best result: 85% conversion with 50 ppm after 40 h. Advanced Chemical Kinetics98
zurück zum  Buch Advanced Chemical Kinetics"
Advanced Chemical Kinetics