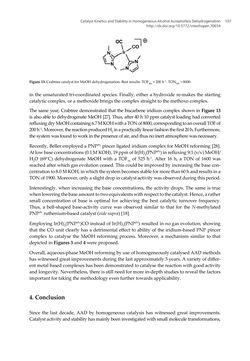 in the unsaturated tri-coordinated species. Finally, either a hydroxide re-makes the starting catalytic complex, or a methoxide brings the complex straight to the methoxo complex. The same year, Crabtree demonstrated that the biscarbene iridium complex shown in Figure 13 is also able to dehydrogenate MeOH [27]. Thus, after 40 h 10 ppm catalyst loading had converted refluxing dry MeOH containing 6.7 M KOH with a TON of 8000, corresponding to an overall TOF of 200 h−1. Moreover, the reaction produced H2 in a practically linear fashion the first 20 h. Furthermore, the system was found to work in the presence of air, and thus no inert atmosphere was necessary. Recently, Beller employed a PNPiPr pincer ligated iridium complex for MeOH reforming [28]. At low base concentrations (0.1 M KOH), 19 ppm of Ir(H)3(PNP iPr) in refluxing 9:1 (v/v) MeOH/ H2O (69°C) dehydrogenate MeOH with a TOF1h of 525 h −1. After 16 h, a TON of 1600 was reached after which gas evolution ceased. This could be improved by increasing the base con- centration to 8.0 M KOH, in which the system becomes stable for more than 60 h and results in a TON of 1900. Moreover, only a slight drop in catalyst activity was observed during this period. Interestingly, when increasing the base concentrations, the activity drops. The same is true when lowering the base amount to two equivalents with respect to the catalyst. Hence, a rather small concentration of base is optimal for achieving the best catalytic turnover frequency. Thus, a bell-shaped base-activity curve was observed similar to that for the N-methylated PNPiPr ruthenium-based catalyst (vide supra) [18]. Employing Ir(H)2(PNP iPr)CO instead of Ir(H)3(PNP iPr) resulted in no gas evolution, showing that the CO unit clearly has a detrimental effect to ability of the iridium-based PNP pincer complex to catalyse the MeOH reforming process. Moreover, a mechanism similar to that depicted in Figures 3 and 4 were proposed. Overall, aqueous-phase MeOH reforming by use of homogeneously catalysed AAD methods has witnessed great improvements during the last approximately 5 years. A variety of differ- ent metal based complexes has been demonstrated to catalyse the reaction with good activity and longevity. Nevertheless, there is still need for more in-depth studies to reveal the factors important for taking the methodology even further towards applicability. 4. Conclusion Since the last decade, AAD by homogeneous catalysis has witnessed great improvements. Catalyst activity and stability has mainly been investigated with small molecule transformations, Figure 13. Crabtree catalyst for MeOH dehydrogenation. Best results: TOF40h = 200 h−1. TON40h = 8000. Catalyst Kinetics and Stability in Homogeneous Alcohol Acceptorless Dehydrogenation http://dx.doi.org/10.5772/intechopen.70654 107
zurück zum  Buch Advanced Chemical Kinetics"
Advanced Chemical Kinetics