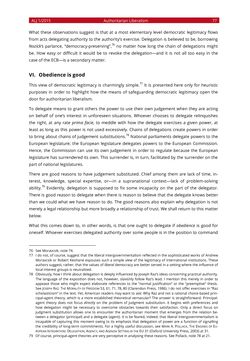 ALJ 1/2015 Authoritarian Liberalism 77 What these observations suggest is that at a most elementary level democratic legitimacy flows from acts delegating authority to the authority’s exercise. Delegation is believed to be, borrowing Nozick’s parlance, “democracy-preserving”,76 no matter how long the chain of delegations might be. How easy or difficult it would be to revoke the delegation—and it is not all too easy in the case of the ECB—is a secondary matter. VI. Obedience is good This view of democratic legitimacy is charmingly simple.77 It is presented here only for heuristic purposes in order to highlight how the means of safeguarding democratic legitimacy open the door for authoritarian liberalism. To delegate means to grant others the power to use their own judgement when they are acting on behalf of one’s interest in unforeseen situations. Whoever chooses to delegate relinquishes the right, at any rate prima facie, to meddle with how the delegate exercises a given power, at least as long as this power is not used excessively. Chains of delegations create powers in order to bring about chains of judgement substitutions.78 National parliaments delegate powers to the European legislature; the European legislature delegates powers to the European Commission. Hence, the Commission can use its own judgement in order to regulate because the European legislature has surrendered its own. This surrender is, in turn, facilitated by the surrender on the part of national legislatures. There are good reasons to have judgement substituted. Chief among them are lack of time, in- terest, knowledge, special expertise, or—in a supranational context—lack of problem-solving ability.79 Evidently, delegation is supposed to fix some incapacity on the part of the delegator. There is good reason to delegate when there is reason to believe that the delegate knows better than we could what we have reason to do. The good reasons also explain why delegation is not merely a legal relationship but more broadly a relationship of trust. We shall return to this matter below. What this comes down to, in other words, is that one ought to delegate if obedience is good for oneself. Whoever exercises delegated authority over some people is in the position to command 76 See Moravcsik, note 74. 77 I do not, of course, suggest that the liberal intergovernmentalism reflected in the sophisticated works of Andrew Moravcsik or Robert Keohane espouses such a simple view of the legitimacy of international institutions. These authors suggest, rather, that the values of liberal democracy are better served in a setting where the influence of local interest groups is neutralized. 78 Obviously, how I think about delegation is deeply influenced by Joseph Raz’s ideas concerning practical authority. The language of the exposition does not, however, slavishly follow Raz’s lead. I mention this merely in order to appease those who might expect elaborate references to the “normal justification” or the “preemptive” thesis. See JOSEPH RAZ, THE MORALITY OF FREEDOM 53, 61, 71, 78, 80 (Clarendon Press, 1986). I do not offer exercises in “Raz scholasticism” in the text. Yet, American readers may want to ask: Why Raz and not a rational choice-based prin- cipal-agent theory, which is a more established theoretical vernacular? The answer is straightforward. Principal- agent theory does not focus directly on the problem of judgment substitution. It begins with preferences and how delegation might be necessary to overcome obstacles towards their satisfaction. Only a direct focus on judgment substitution allows one to encounter the authoritarian moment that emerges from the relation be- tween a delegator (principal) and a delegate (agent). It is be feared, indeed, that liberal intergovernmentalism is incapable of capturing this moment owing to its emphasis that delegation of power are a function of signalling the credibility of long-term commitments. For a highly useful discussion, see MARK A. POLLACK, THE ENGINES OF EU- ROPEAN INTEGRATION: DELEGATION, AGENCY, AND AGENDA SETTING IN THE EU 31 (Oxford University Press, 2003) at 31. 79 Of course, principal-agent theories are very perceptive in analysing these reasons. See Pollack, note 78 at 21.
zurück zum  Buch Austrian Law Journal, Band 1/2015"
Austrian Law Journal Band 1/2015