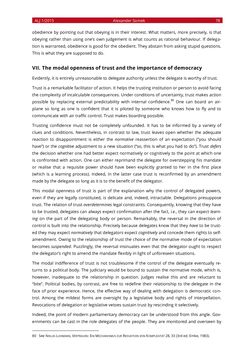 ALJ 1/2015 Alexander Somek 78 obedience by pointing out that obeying is in their interest. What matters, more precisely, is that obeying rather than using one’s own judgement is what counts as rational behaviour. If delega- tion is warranted, obedience is good for the obedient. They abstain from asking stupid questions. This is what they are supposed to do. VII. The modal openness of trust and the importance of democracy Evidently, it is entirely unreasonable to delegate authority unless the delegate is worthy of trust. Trust is a remarkable facilitator of action. It helps the trusting institution or person to avoid facing the complexity of incalculable consequences. Under conditions of uncertainty, trust makes action possible by replacing external predictability with internal confidence.80 One can board an air- plane so long as one is confident that it is piloted by someone who knows how to fly and to communicate with air traffic control. Trust makes boarding possible. Trusting confidence must not be completely unfounded. It has to be informed by a variety of clues and conditions. Nevertheless, in contrast to law, trust leaves open whether the adequate reaction to disappointment is either the normative reassertion of an expectation (“you should have”) or the cognitive adjustment to a new situation (“so, this is what you had to do”). Trust defers the decision whether one had better expect normatively or cognitively to the point at which one is confronted with action. One can either reprimand the delegate for overstepping his mandate or realise that a requisite power should have been explicitly granted to her in the first place (which is a learning process). Indeed, in the latter case trust is reconfirmed by an amendment made by the delegate so long as it is to the benefit of the delegator. This modal openness of trust is part of the explanation why the control of delegated powers, even if they are legally constituted, is delicate and, indeed, intractable. Delegations presuppose trust. The relation of trust overdetermines legal constraints. Consequently, knowing that they have to be trusted, delegates can always expect confirmation after the fact, i.e., they can expect learn- ing on the part of the delegating body or person. Remarkably, the reversal in the direction of control is built into the relationship. Precisely because delegates know that they have to be trust- ed they may expect normatively that delegators expect cognitively and concede them rights to self- amendment. Owing to the relationship of trust the choice of the normative mode of expectation becomes suspended. Puzzlingly, the reversal insinuates even that the delegator ought to respect the delegator’s right to amend the mandate flexibly in light of unforeseen situations. The modal indifference of trust is not troublesome if the control of the delegate eventually re- turns to a political body. The judiciary would be bound to sustain the normative mode, which is, however, inadequate to the relationship in question. Judges realise this and are reluctant to “bite”. Political bodies, by contrast, are free to redefine their relationship to the delegate in the face of prior experience. Hence, the effective way of dealing with delegation is democratic con- trol. Among the mildest forms are oversight by a legislative body and rights of interpellation. Revocations of delegation or legislative vetoes sustain trust by rescinding it selectively. Indeed, the point of modern parliamentary democracy can be understood from this angle. Gov- ernments can be cast in the role delegates of the people. They are monitored and overseen by 80 See NIKLAS LUHMANN, VERTRAUEN: EIN MECHANISMUS ZUR REDUKTION VON KOMPLEXITÄT 28, 33 (3rd ed. Emke, 1983).
zurück zum  Buch Austrian Law Journal, Band 1/2015"
Austrian Law Journal Band 1/2015