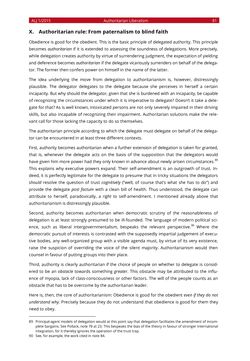 ALJ 1/2015 Authoritarian Liberalism 81 X. Authoritarian rule: From paternalism to blind faith Obedience is good for the obedient. This is the basic principle of delegated authority. This principle becomes authoritarian if it is extended to assessing the soundness of delegations. More precisely, while delegation creates authority by virtue of surrendering judgment, the expectation of yielding and deference becomes authoritarian if the delegate vicariously surrenders on behalf of the delega- tor. The former then confers power on himself in the name of the latter. The idea underlying the move from delegation to authoritarianism is, however, distressingly plausible. The delegator delegates to the delegate because she perceives in herself a certain incapacity. But why should the delegator, given that she is burdened with an incapacity, be capable of recognizing the circumstances under which it is imperative to delegate? Doesn’t it take a dele- gate for that? As is well known, intoxicated persons are not only severely impaired in their driving skills, but also incapable of recognizing their impairment. Authoritarian solutions make the rele- vant call for those lacking the capacity to do so themselves. The authoritarian principle according to which the delegate must delegate on behalf of the delega- tor can be encountered in at least three different contexts. First, authority becomes authoritarian when a further extension of delegation is taken for granted, that is, whenever the delegate acts on the basis of the supposition that the delegators would have given him more power had they only known in advance about newly arisen circumstances.89 This explains why executive powers expand. Their self-amendment is an outgrowth of trust. In- deed, it is perfectly legitimate for the delegate to presume that in tricky situations the delegators should resolve the question of trust cognitively (“well, of course that’s what she has to do”) and provide the delegate post factum with a clean bill of health. Thus understood, the delegate can attribute to herself, paradoxically, a right to self-amendment. I mentioned already above that authoritarianism is distressingly plausible. Second, authority becomes authoritarian when democratic scrutiny of the reasonableness of delegation is at least strongly presumed to be ill-founded. The language of modern political sci- ence, such as liberal intergovernmentalism, bespeaks the relevant perspective.90 Where the democratic pursuit of interests is contrasted with the supposedly impartial judgement of execu- tive bodies, any well-organized group with a visible agenda must, by virtue of its very existence, raise the suspicion of overriding the voice of the silent majority. Authoritarianism would then counsel in favour of putting groups into their place. Third, authority is clearly authoritarian if the choice of people on whether to delegate is consid- ered to be an obstacle towards something greater. This obstacle may be attributed to the influ- ence of myopia, lack of class-consciousness or other factors. The will of the people counts as an obstacle that has to be overcome by the authoritarian leader. Here is, then, the core of authoritarianism: Obedience is good for the obedient even if they do not understand why. Precisely because they do not understand that obedience is good for them they need to obey. 89 Principal-agent models of delegation would at this point say that delegation facilitates the amendment of incom- plete bargains. See Pollack, note 78 at 23. This bespeaks the bias of the theory in favour of stronger international integration, for it thereby ignores the operation of the trust trap. 90 See, for example, the work cited in note 84.
zurück zum  Buch Austrian Law Journal, Band 1/2015"
Austrian Law Journal Band 1/2015