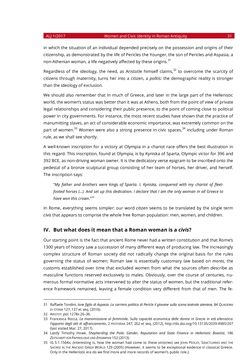 ALJ 1/2017 Women and Civic Identity in Roman Antiquity 31 in which the situation of an individual depended precisely on the possession and origins of their citizenship, as demonstrated by the life of Pericles the Younger, the son of Pericles and Aspasia, a non-Athenian woman, a life negatively affected by these origins.31 Regardless of the ideology, the need, as Aristotle himself claims,32 to overcome the scarcity of citizens through maternity, turns her into a citizen, a polìtis: the demographic reality is stronger than the ideology of exclusion. We should also remember that in much of Greece, and later in the large part of the Hellenistic world, the women’s status was better than it was at Athens, both from the point of view of private legal relationships and considering their public presence, to the point of coming close to political power in city governments. For instance, the most recent studies have shown that the practice of manumitting slaves, an act of considerable economic importance, was extremely common on the part of women.33 Women were also a strong presence in civic spaces,34 including under Roman rule, as we shall see shortly. A well-known inscription for a victory at Olympia in a chariot race offers the best illustration in this regard. This inscription, found at Olympia, is by Kyniska of Sparta, Olympic victor for 396 and 392 BCE, as non-driving woman owner. It is the dedicatory verse epigram to be inscribed onto the pedestal of a bronze sculptural group consisting of her team of horses, her driver, and herself. The inscription says: “My father and brothers were kings of Sparta. I, Kyniska, conquered with my chariot of fleet- footed horses (…). And set up this dedication. I declare that I am the only woman in all Greece to have won this crown.”35 In Rome, everything seems simpler: our word citizen seems to be translated by the single term civis that appears to comprise the whole free Roman population: men, women, and children. IV. But what does it mean that a Roman woman is a civis? Our starting point is the fact that ancient Rome never had a written constitution and that Rome’s 1300 years of history saw a succession of many different ways of producing law. The increasingly complex structure of Roman society did not radically change the original basis for the rules governing the status of women: Roman law is essentially customary law based on mores, the customs established over time that excluded women from what the sources often describe as masculine functions reserved exclusively to males. Obviously, over the course of centuries, nu- merous formal normative acts intervened to alter the status of women, but the traditional refer- ence framework remained, leaving a female condition very different from that of men. The fe- 31 Raffaele Tondini, Ione figlio di Aspasia. La carriera politica di Pericle il giovane sulla scena teatrale ateniese, 84 QUADERNI DI STORIA 127, 137 et seq. (2016). 32 ARISTOT. pol. 1278A 26–36. 33 Francesca Rocca, La manomissione al femminile. Sulla capacità economica delle donne in Grecia in età ellenistica: l’apporto degli atti di affrancamento, 2 HISTORIKΑ 247, 262 et seq. (2012), http://dx.doi.org/10.13135/2039-4985/207 (last visited Mar. 27, 2017). 34 Lastly Timothy Howe, Shepherding the Polis: Gender, Reputation and State Finance in Hellenistic Boeotia, 186 ZEITSCHRIFT FÜR PAPYROLOGIE UND EPIGRAPHIK 152 (2013). 35 IG 5.1.1564A; (interesting is, how the woman had come to these victories) see JOHN PEDLEY, SANCTUARIES AND THE SACRED IN THE ANCIENT GREEK WORLD 129 (2005) (However, it seems to be exceptional evidence in classical Greece. Only in the Hellenistic era do we find more and more records of women’s public role.).
zurück zum  Buch Austrian Law Journal, Band 1/2017"
Austrian Law Journal Band 1/2017