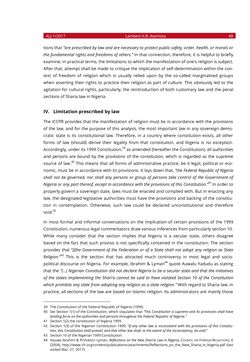 ALJ 1/2017 Lambert H.B. Asemota 48 tions that ”are prescribed by law and are necessary to protect public safety, order, health, or morals or the fundamental rights and freedoms of others.” In that connection, therefore, it is helpful to briefly examine, in practical terms, the limitations to which the manifestation of one's religion is subject. After that, attempt shall be made to critique the implication of self-determination within the con- text of freedom of religion which is usually relied upon by the so-called marginalised groups when asserting their rights to practice their religion as part of culture. This obviously led to the agitation for cultural rights, particularly, the reintroduction of both customary law and the penal sections of Sharia law in Nigeria. IV. Limitation prescribed by law The ICCPR provides that the manifestation of religion must be in accordance with the provisions of the law, and for the purpose of this analysis, the most important law in any sovereign demo- cratic state is its constitutional law. Therefore, in a country where constitution exists, all other forms of law (should) derive their legality from that constitution, and Nigeria is no exception. Accordingly, under its 1999 Constitution,39 as amended (hereafter the Constitution), all authorities and persons are bound by the provisions of the constitution, which is regarded as the supreme source of law.40 This means that all forms of administrative practice, be it legal, political or eco- nomic, must be in accordance with its provisions. It lays down that, ”the Federal Republic of Nigeria shall not be governed, nor shall any persons or group of persons take control of the Government of Nigeria or any part thereof, except in accordance with the provisions of this Constitution.”41 In order to properly govern a sovereign state, laws must be enacted and complied with. But in enacting any law, the designated legislative authorities must have the provisions and backing of the constitu- tion in contemplation. Otherwise, such law could be declared unconstitutional and therefore void.42 In most formal and informal conversations on the implication of certain provisions of the 1999 Constitution, numerous legal commentators draw various inferences from particularly section 10. While many consider that the section implies that Nigeria is a secular state, others disagree based on the fact that such proviso is not specifically contained in the constitution. The section provides that ”[t]he Government of the Federation or of a State shall not adopt any religion as State Religion.”43 This is the section that has attracted much controversy in most legal and socio- political discourse on Nigeria. For example, Ibrahim & Lyman44 quote Auwalu Yadudu as stating that the ”(...) Nigerian Constitution did not declare Nigeria to be a secular state and that the initiatives of the states implementing the Shari’a cannot be said to have violated Section 10 of the Constitution which prohibits any state from adopting any religion as a state religion.” With regard to Sharia law, in practice, all sections of the law are based on Islamic religion. Its administrators are mainly those 39 The Constitution of the Federal Republic of Nigeria (1999). 40 See Section 1(1) of the Constitution, which stipulates that “This Constitution is supreme and its provisions shall have binding force on the authorities and persons throughout the Federal Republic of Nigeria.” 41 Section 1(2) the constitution of Nigeria 1999. 42 Section 1(3) of the Nigerian Constitution 1999: ”If any other law is inconsistent with the provisions of this Constitu- tion, this Constitution shall prevail, and that other law shall, to the extent of the inconsistency, be void.” 43 Section 10 of the Nigerian 1999 Constitution. 44 Hauwa Ibrahim & Princeton Lyman, Reflections on the New Shari’a Law in Nigeria, COUNCIL ON FOREIGN RELAGTIONS, 6 (2004), http://www.cfr.org/content/publications/attachments/Reflections_on_the_New_Sharia_in_Nigeria.pdf (last visited Mar. 27, 2017).
zurück zum  Buch Austrian Law Journal, Band 1/2017"
Austrian Law Journal Band 1/2017