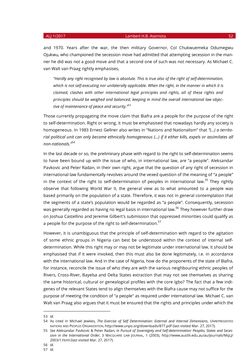 ALJ 1/2017 Lambert H.B. Asemota 52 and 1970. Years after the war, the then military Governor, Col Chukwuemeka Odumegwu Ojukwu, who championed the secession move had admitted that attempting secession in the man- ner he did was not a good move and that a second one of such was not necessary. As Michael C. van Walt van Praag rightly emphasises, “Hardly any right recognised by law is absolute. This is true also of the right of self-determination, which is not self-executing nor unilaterally applicable. When the right, in the manner in which it is claimed, clashes with other international legal principles and rights, all of these rights and principles should be weighed and balanced, keeping in mind the overall international law objec- tive of maintenance of peace and security.”53 Those currently propagating the move claim that Biafra are a people for the purpose of the right to self-determination. Right or wrong, it must be emphasised that nowadays hardly any society is homogeneous. In 1983 Ernest Gellner also writes in ”Nations and Nationalism” that ”(...) a territo- rial political unit can only become ethnically homogeneous (...) if it either kills, expels or assimilates all non-nationals.”54 In the last decade or so, the preliminary phase with regard to the right to self-determination seems to have been bound up with the issue of who, in international law, are “a people”. Aleksandar Pavkovic and Peter Radan, in their own right, argue that the question of any right of secession in international law fundamentally revolves around the vexed question of the meaning of “a people” in the context of the right to self-determination of peoples in international law.55 They rightly observe that following World War II, the general view as to what amounted to a people was based primarily on the population of a state. Therefore, it was not in general contemplation that the segments of a state’s population would be regarded as “a people”. Consequently, secession was generally regarded as having no legal basis in international law.56 They however further draw on Joshua Castellino and Jeremie Gilbert's submission that oppressed minorities could qualify as a people for the purpose of the right to self-determination.57 However, it is unambiguous that the principle of self-determination with regard to the agitation of some ethnic groups in Nigeria can best be understood within the context of internal self- determination. While this right may or may not be legitimate under international law, it should be emphasised that if it were invoked, then this must also be done legitimately, i.e. in accordance with the international law. And in the case of Nigeria, how do the proponents of the state of Biafra, for instance, reconcile the issue of who they are with the various neighbouring ethnic peoples of Rivers, Cross-River, Bayelsa and Delta States extraction that may not see themselves as sharing the same historical, cultural or genealogical profiles with the core Igbo? The fact that a few indi- genes of the relevant States tend to align themselves with the Biafra cause may not suffice for the purpose of meeting the condition of "a people" as required under international law. Michael C. van Walt van Praag also argues that it must be ensured that the rights and principles under which the 53 Id. 54 As cited in Michael Jewkes, The Exercise of Self Determination: External and Internal Dimensions, UNREPRESENTED NATIONS AND PEOPLES ORGANIZATION, http://www.unpo.org/downloads/877.pdf (last visited Mar. 27, 2017). 55 See Aleksandar Pavkovic & Peter Radan, In Pursuit of Sovereignty and Self-determination: Peoples, States and Seces- sion in the International Order, 3 MACQUARIE LAW JOURNAL, 1 (2003), http://www.austlii.edu.au/au/journals/MqLJ/ 2003/1.html (last visited Mar. 27, 2017). 56 Id. 57 Id.
zurück zum  Buch Austrian Law Journal, Band 1/2017"
Austrian Law Journal Band 1/2017