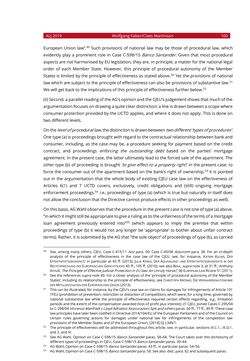 ALJ 2019 Wolfgang Faber/Claes Martinson 100 European Union law”.49 Such provisions of national law may be those of procedural law, which evidently play a prominent role in Case C-598/15 Banco Santander. Given that most procedural aspects are not harmonised by EU legislation, they are, in principle, a matter for the national legal order of each Member State. However, this principle of procedural autonomy of the Member States is limited by the principle of effectiveness as stated above.50 Yet the provisions of national law which are subject to the principle of effectiveness can also be provisions of substantive law.51 We will get back to the implications of this principle of effectiveness further below.52 (ii) Second, a parallel reading of the AG’s opinion and the CJEU’s judgement shows that much of the argumentation focuses on drawing a quite clear distinction: a line is drawn between a scope where consumer protection provided by the UCTD applies, and where it does not apply. This is done on two different levels. On the level of procedural law, the distinction is drawn between two different ‘types of procedures’. One type (a) is proceedings brought with regard to the contractual relationship between bank and consumer, including, as the case may be, a procedure seeking for payment based on the credit contract, and proceedings enforcing the outstanding debt based on the parties’ mortgage agreement. In the present case, the latter ultimately lead to the forced sale of the apartment. The other type (b) of proceeding is brought ‘to give effect to a property right’; in the present case: to force the consumer out of the apartment based on the bank’s right of ownership.53 It is pointed out in the argumentation that the whole body of existing CJEU case law on the effectiveness of Articles 6(1) and 7 UCTD covers, exclusively, credit obligations and (still) ongoing mortgage enforcement proceedings,54 i.e., proceedings of type (a) (which is true but naturally in itself does not allow the conclusion that the Directive cannot produce effects in other proceedings as well). On this basis, AG Wahl observes that the procedure in the present case is not one of type (a) above, “in which it might still be appropriate to give a ruling as to the unfairness of the terms of a mortgage loan agreement previously entered into”55 (which appears to imply the premise that within proceedings of type (b) it would not any longer be ‘appropriate’ to bother about unfair contract terms). Rather, it is submitted by the AG that “the sole object” of proceedings of type (b), as carried 49 See, among many others, CJEU, Case C-415/11 Aziz para. 50; Case C-40/08 Asturcom para. 38. For an in-depth analysis of the principle of effectiveness in the case law of the CJEU, see, for instance, KATRIN KULMS, DER EFFEKTIVITÄTSGRUNDSATZ in particular at 43 ff. (2013); JULIA KÖNIG, DER ÄQUIVALENZ- UND EFFEKTIVITÄTSGRUNDSATZ IN DER RECHTSPRECHUNG DES EUROPÄISCHEN GERICHTSHOFS 43 ff., 105 ff. (2010); see also BEKA, supra note 3, at 31 ff.; Anthony Arnull, The Principle of Effective Judicial Protection in EU law: An Unruly Horse?, 36 EUROPEAN LAW REVIEW 51 (2011). 50 See the references supra note 49. For a closer analysis of the ‘principle of procedural autonomy of the Member States’, including its relationship to the principle of effectiveness, see CHRISTOPH KRÖNKE, DIE VERFAHRENSAUTONOMIE DER MITGLIEDSTAATEN DER EUROPÄISCHEN UNION (2013). 51 This can be illustrated, for instance, by the CJEU’s case law on claims for damages for infringements of Article 101 TFEU (prohibition of prevention, restriction or distortion of competition), which were, for a long time, governed by national substantive law while the principle of effectiveness required certain effects regarding, e.g., limitation periods and the extent of the compensation awarded (loss of profit plus interest); cf. CJEU, Joined Cases C-295/04 to C-298/04 Vincenzo Manfredi v Lloyd Adriatico Assicurazioni SpA and others paras. 60 ff., 77 ff., 89 ff. These case law principles have later been codified in Directive 2014/104/EU of the European Parliament and of the Council on certain rules governing actions for damages under national law for infringements of the competition law provisions of the Member States and of the European Union, [2014] OJ L349/1. 52 The principle of effectiveness will be addressed throughout this article; see, in particular, sections III.C.1., III.D.1. and 2. and IV. 53 See AG Wahl, Opinion on Case C-598/15 Banco Santander paras. 58–68. The Court takes over this dichotomy of different types of proceedings in CJEU, Case C-598/15 Banco Santander paras. 39–44. 54 AG Wahl, Opinion on Case C-598/15 Banco Santander paras. 43 ff., in particular paras. 54–56. 55 AG Wahl, Opinion on Case C-598/15 Banco Santander para. 58. See also ibid., para. 62 and subsequent paras.
zurück zum  Buch Austrian Law Journal, Band 1/2019"
Austrian Law Journal Band 1/2019