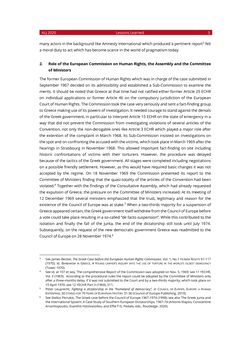 ALJ 2020 Lessons Learned 3 many actors in the background like Amnesty International which produced a pertinent report3 felt a moral duty to act which has become scarce in the world of pragmatism today. 2. Role of the European Commission on Human Rights, the Assembly and the Committee of Ministers The former European Commission of Human Rights which was in charge of the case submitted in September 1967 decided on its admissibility and established a Sub-Commission to examine the merits. It should be noted that Greece at that time had not ratified either former Article 25 ECHR on individual applications or former Article 46 on the compulsory jurisdiction of the European Court of Human Rights. The Commission took the case very seriously and sent a fact-finding group to Greece making use of its powers of investigation. It needed courage to stand against the denials of the Greek government, in particular to interpret Article 15 ECHR on the state of emergency in a way that did not prevent the Commission from investigating violations of several articles of the Convention, not only the non-derogable ones like Article 3 ECHR which played a major role after the extention of the complaint in March 1968. Its Sub-Commission insisted on investigations on the spot and on confronting the accused with the victims, which took place in March 1969 after the hearings in Strasbourg in November 1968. This allowed important fact-finding on site including historic confrontations of victims with their torturers. However, the procedure was delayed because of the tactics of the Greek government. All stages were completed including negotiations on a possible friendly settlement. However, as this would have required basic changes it was not accepted by the regime. On 18 November 1969 the Commission presented its report to the Committee of Ministers finding that the quasi-totality of the articles of the Convention had been violated.4 Together with the findings of the Consultative Assembly, which had already requested the expulsion of Greece, the pressure on the Committee of Ministers increased. At its meeting of 12 December 1969 several ministers emphasized that the trust, legitimacy and reason for the existence of the Council of Europe was at stake.5 When a two-thirds majority for a suspension of Greece appeared certain, the Greek government itself withdrew from the Council of Europe before a vote could take place resulting in a so-called “de facto suspension”. While this contributed to the isolation and finally the fall of the junta, the end of the dictatorship still took until July 1974. Subsequently, on the request of the new democratic government Greece was readmitted to the Council of Europe on 28 November 1974.6 3 See James Becket, The Greek Case before the European Human Rights Commission, Vol. 1, No.1 HUMAN RIGHTS 91-117 (1970); id. BARBARISM IN GREECE, A YOUNG LAWYER’S INQUIRY INTO THE USE OF TORTURE IN THE WORLD’S OLDEST DEMOCRACY (Tower 1970). 4 See id. at 107 et seq. The comprehensive Report of the Commission was adopted on Nov. 5, 1969; see 11 YECHR, Vol. II (1969). According to the procedural rules the report could be adopted by the Committee of Ministers only after a three-months delay, if it was not submitted to the Court and by a two-thirds majority, which took place on 15 April 1970; see 12 YECHR Part II (1969), 511. 5 Peter Leuprecht, Fighting a dictatorship in the “homeland of democracy”, in COUNCIL OF EUROPE, EUROPE: A HUMAN ENTERPRISE, 30 STORIES FOR 70 YEARS OF EUROPEAN HISTORY 31-36 (Council of Europe Publishing, 2019). 6 See Stelios Perrakis, The Greek case before the Council of Europe 1967-1974 (1998); see also The Greek Junta and the International System: A Case Study of Southern European Dictatorships, 1967-74 (Antonis Klapsis, Constantine Arvanitopoulos, Evanthis Hatzivassiliou and Effie F.G. Pedaliu eds., Routledge. 2020).
zurück zum  Buch Austrian Law Journal, Band 1/2020"
Austrian Law Journal Band 1/2020