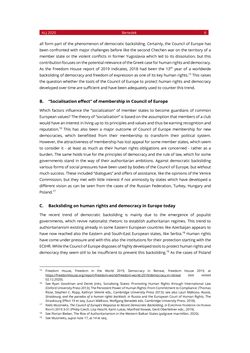 ALJ 2020 Benedek 6 all form part of the phenomenon of democratic backsliding. Certainly, the Council of Europe has been confronted with major challenges before like the second Chechen war on the territory of a member state or the violent conflicts in former Yugoslavia which led to its dissolution, but this contribution focuses on the potential relevance of the Greek case for human rights and democracy. As the Freedom House report of 2019 indicates, 2018 had been the 13th year of a worldwide backsliding of democracy and freedom of expression as one of its key human rights.15 This raises the question whether the tools of the Council of Europe to protect human rights and democracy developed over time are sufficient and have been adequately used to counter this trend. B. “Socialisation effect” of membership in Council of Europe Which factors influence the “socialization” of member states to become guardians of common European values? The theory of “socialization” is based on the assumption that members of a club would have an interest in living up to its principles and values and thus be earning recognition and reputation.16 This has also been a major outcome of Council of Europe membership for new democracies, which benefitted from their membership to transform their political system. However, the attractiveness of membership has lost appeal for some member states, which seem to consider it - at least as much as their human rights obligations are concerned - rather as a burden. The same holds true for the principles of democracy and the rule of law, which for some governments stand in the way of their authoritarian ambitions. Against democratic backsliding various forms of social pressures have been used by bodies of the Council of Europe, but without much success. These included “dialogues” and offers of assistance, like the opinions of the Venice Commission, but they met with little interest if not animosity by states which have developed a different vision as can be seen from the cases of the Russian Federation, Turkey, Hungary and Poland.17 C. Backsliding on human rights and democracy in Europe today The recent trend of democratic backsliding is mainly due to the emergence of populist governments, which revive nationalist rhetoric to establish authoritarian regimes. This trend to authoritarianism existing already in some Eastern European countries like Azerbaijan appears to have now reached also the Eastern and South-East European states, like Serbia.18 Human rights have come under pressure and with this also the institutions for their protection starting with the ECtHR. While the Council of Europe disposes of highly developed tools to protect human rights and democracy they seem still to be insufficient to prevent this backsliding.19 As the cases of Poland 15 Freedom House, Freedom in the World 2019, Democracy in Retreat, Freedom House 2019, at https://freedomhouse.org/report/freedom-world/freedom-world-2019/democracy-in-retreat (last visited 02.12.2020). 16 See Ryan Goodman and Derek Jinks, Socialising States: Promoting Human Rights through International Law (Oxford University Press 2013); The Persistent Power of Human Rights: From Commitment to Compliance (Thomas Risse, Stephen C. Ropp, Kathryn Sikkink eds., Cambridge University Press 2013); see also Lauri Mälksoo, Russia, Strasbourg, and the paradox of a human rights backlash, in Russia and the European Court of Human Rights, The Strasbourg Effect 19 et seq. (Lauri Mälksoo, Wolfgang Benedek eds. Cambridge University Press. 2018). 17 Niels Muiznieks, The Council of Europe’s Response to Recent Democratic Backsliding, in EUROPEAN YEARBOOK ON HUMAN RIGHTS 2019 3-31 (Philip Czech, Lisa Heschl, Karin Lukas, Manfred Nowak, Gerd Oberleitner eds., 2019). 18 See Florian Bieber, The Rise of Authoritarianism in the Western Balkan States (palgrave macmillan. 2020). 19 See Muiznieks, supra note 17, at 14 et seq.
zurück zum  Buch Austrian Law Journal, Band 1/2020"
Austrian Law Journal Band 1/2020