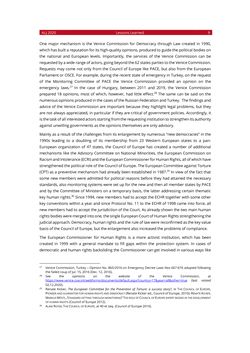 ALJ 2020 Lessons Learned 9 One major mechanism is the Venice Commission for Democracy through Law created in 1990, which has built a reputation for its high-quality opinions, produced to guide the political bodies on the national and European levels. Importantly, the services of the Venice Commission can be requested by a wide range of actors, going beyond the 62 states parties to the Venice Commission. Requests may come not only from the Council of Europe like PACE, but also from the European Parliament or OSCE. For example, during the recent state of emergency in Turkey, on the request of the Monitoring Committee of PACE the Venice Commission provided an opinion on the emergency laws.27 In the case of Hungary, between 2011 and 2019, the Venice Commission prepared 18 opinions, most of which, however, had little effect.28 The same can be said on the numerous opinions produced in the cases of the Russian Federation and Turkey. The findings and advice of the Venice Commission are important because they highlight legal problems, but they are not always appreciated, in particular if they are critical of government policies. Accordingly, it is the task of all interested actors starting from the requesting institution to strengthen its authority against unwilling governments as the opinions themselves are only advisory. Mainly as a result of the challenges from its enlargement by numerous “new democracies” in the 1990s leading to a doubling of its membership from 23 Western European states to a pan- European organization of 47 states, the Council of Europe has created a number of additional mechanisms like the Advisory Committee on National Minorities, the European Commission on Racism and Intolerance (ECRI) and the European Commissioner for Human Rights, all of which have strengthened the political role of the Council of Europe. The European Committee against Torture (CPT) as a preventive mechanism had already been established in 1987.29 In view of the fact that some new members were admitted for political reasons before they had attained the necessary standards, also monitoring systems were set up for the new and then all member states by PACE and by the Committee of Ministers on a temporary basis, the latter addressing certain thematic key human rights.30 Since 1994, new members had to accept the ECHR together with some other key conventions within a year and since Protocol No. 11 to the ECHR of 1998 came into force, all new members had to accept the jurisdiction of the Court. As already shown the two main human rights bodies were merged into one, the single European Court of Human Rights strengthening the judicial approach. Democracy, human rights and the rule of law were reconfirmed as the key value basis of the Council of Europe, but the enlargement also increased the problems of compliance. The European Commissioner for Human Rights is a more activist institution, which has been created in 1999 with a general mandate to fill gaps within the protection system. In cases of democratic and human rights backsliding the Commissioner can get involved in various ways like 27 Venice Commission, Turkey – Opinion No. 865/2016 on Emergency Decree Laws Nos 667-676 adopted following the failed coup of Jul. 15, 2016 (Dec. 12, 2016). 28 See the opinions on the website of the Venice Commission, at https://www.venice.coe.int/webforms/documents/default.aspx?country=17&year=all&other=true (last visited 02.12.2020). 29 Renate Kicker, The European Committee for the Prevention of Torture: a success story?, in THE COUNCIL OF EUROPE, PIONEER AND GUARANTOR FOR HUMAN RIGHTS AND DEMOCRACY (Renate Kicker ed., Council of Europe, 2010); RENATE KICKER, MARKUS MÖSTL, STANDARD-SETTING THROUGH MONITORING? THE ROLE OF COUNCIL OF EUROPE EXPERT BODIES IN THE DEVELOPMENT OF HUMAN RIGHTS (Council of Europe 2012). 30 ALINE ROYER, THE COUNCIL OF EUROPE, at 40 et seq. (Council of Europe 2010).
zurück zum  Buch Austrian Law Journal, Band 1/2020"
Austrian Law Journal Band 1/2020