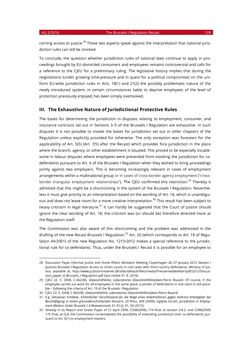 ALJ 2/2016 The Brussels I Regulation Recast 128 cerning access to justice.28 These two aspects speak against the interpretation that national juris- diction rules can still be invoked. To conclude, the question whether jurisdiction rules of national laws continue to apply in pro- ceedings brought by EU-domiciled consumers and employees remains controversial and calls for a reference to the CJEU for a preliminary ruling. The legislative history implies that during the negotiations (under growing time-pressure and in quest for a political compromise) on the uni- form EU-wide jurisdiction rules in Arts. 18(1) and 21(2) the possibly problematic nature of the newly introduced system, in certain circumstances liable to deprive employees of the level of protection previously enjoyed, has been simply overlooked. III. The Exhaustive Nature of Jurisdictional Protective Rules The bases for determining the jurisdiction in disputes relating to employment, consumer, and insurance contracts set out in Sections 3–5 of the Brussels I Regulation are exhaustive. In such disputes it is not possible to invoke the bases for jurisdiction set out in other chapters of the Regulation unless explicitly provided for otherwise. The only exception was foreseen for the applicability of Art. 5(5) (Art. 7(5) after the Recast) which provides fora jurisdiction in the place where the branch, agency, or other establishment is situated. This proved to be especially trouble- some in labour disputes where employees were prevented from invoking the jurisdiction for co- defendants pursuant to Art. 6 of the Brussels I Regulation when they wished to bring proceedings jointly against two employers. This is becoming increasingly relevant in cases of employment arrangements within a multinational group or in cases of cross-border agency employment (“cross- border triangular employment relationships”). The CJEU confirmed this restriction.29 Thereby it admitted that this might be a shortcoming in the system of the Brussels I Regulation. Neverthe- less it must give priority to an interpretation based on the wording of Art. 18, which is unambigu- ous and does not leave room for a more creative interpretation.30 This result has been subject to heavy criticism in legal literature.31 It can hardly be suggested that the Court of Justice should ignore the clear wording of Art. 18; the criticism was (or should be) therefore directed more at the Regulation itself. The Commission was also aware of this shortcoming and the problem was addressed in the drafting of the new Recast Brussels I Regulation.32 Art. 20 (which corresponds to Art. 18 of Regu- lation 44/2001) of the new Regulation No. 1215/2012 makes a special reference to the jurisdic- tional rule for co-defendants. Thus, under the Brussels I Recast it is possible for an employee to 28 Discussion Paper Informal Justice and Home Affairs Ministers’ Meeting Copenhagen 26–27 January 2012 Session I (Justice) Brussels I-Regulation Access to Union courts in civil cases with third country defendants, Ministry of Jus- tice, available at: http://www.justitsministeriet.dk/sites/default/files/media/Pressemeddelelser/pdf/2012/Discus- sion_paper_4_Brussels_I-Regulation.pdf (last visited 31. 8. 2016) 29 CJEU 22. 5. 2008, C-462/06, Glaxosmithkline, Laboratoires GlaxoSmithKline/Jean-Pierre Rouard. Of course, if the employee carries out work for all employees in the same place, a joinder of defendants in one claim is still possi- ble – following the criteria of Art. 19 of the Brussels I Regulation. 30 CJEU 22. 5. 2008, C-462/06, Glaxosmithkline, Laboratoires GlaxoSmithKline/Jean-Pierre Rouard. 31 E.g. Sebastian Krebber, Einheitlicher Gerichtsstand für die Klage eines Arbeitnehmers gegen mehrere Arbeitgeber bei Beschäftigung in einem grenzüberschreitenden Konzern, 29 IPRAX, 409 (2009); Uglješa Grušić, Jurisdiction in Employ- ment Matters Under Brussels I: A Reassessment, 61 ICLQ, 91, 94 (2012). 32 Already in its Report and Green Paper of 21 April 2009, COM(2009), 174 final, at section 3.8.2. and COM(2009) 175 final, at Q.8, the Commission contemplated the possibility of extending jurisdiction over co-defendants pur- suant to Art. 6(1) to employment matters.
zurück zum  Buch Austrian Law Journal, Band 2/2016"
Austrian Law Journal Band 2/2016