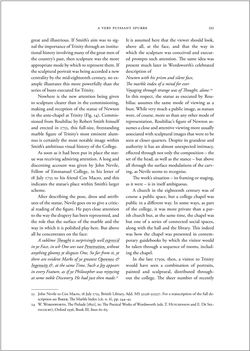 great and illustrious. If Smith’s aim was to sig- nal the importance of Trinity through an institu- tional history involving many of the great men of the country’s past, then sculpture was the more appropriate mode by which to represent them. If the sculptural portrait was being accorded a new centrality by the mid-eighteenth century, no ex- ample illustrates this more powerfully than the series of busts executed for Trinity. Nowhere is the new attention being given to sculpture clearer than in the commissioning, making and reception of the statue of Newton in the ante-chapel at Trinity (Fig. 14). Commis- sioned from Roubiliac by Robert Smith himself and erected in 1755, this full-size, freestanding marble figure of Trinity’s most eminent alum- nus is certainly the most notable image within Smith’s ambitious visual history of the College. As soon as it had been put in place the stat- ue was receiving admiring attention. A long and discerning account was given by John Nevile, Fellow of Emmanuel College, in his letter of 18 July 1755 to his friend Cox Macro, and this indicates the statue’s place within Smith’s larger scheme. After describing the pose, dress and attrib- utes of the statue, Nevile goes on to give a critic- al reading of the figure. He pays close attention to the way the drapery has been represented, and the role that the surface of the marble and the way in which it is polished play here. But above all he concentrates on the face: A sublime Thought is surprisingly well express’d in ye Face, in wh One sees vast Penetration, wthout anything gloomy yt disgusts One, So far from it, yt there are evident Marks of ye greatest Openness & Ingenuity &, at the same Time, Such a Joy appears in every Feature, as if ye Philosopher was rejoycing at some noble Discovery, He had just then made.23 It is assumed here that the viewer should look, above all, at the face, and that the way in which the sculpture was conceived and execut- ed prompts such attention. The same idea was present much later in Wordsworth’s celebrated description of Newton with his prism and silent face, The marble index of a mind for ever Voyaging through strange seas of Thought, alone.24 In this respect, the statue as executed by Rou- biliac assumes the same mode of viewing as a bust. While very much a public image, as statues were, of course, more so than any other mode of representation, Roubiliac’s figure of Newton as- sumes a close and attentive viewing more usually associated with sculptural images that were to be seen at closer quarters. Despite its grandeur and authority it has an almost unexpected intimacy, effected through not only the composition – the set of the head, as well as the stance – but above all through the surface modulations of the carv- ing, as Nevile seems to recognise. The work’s situation – its framing or staging, as it were – is in itself ambiguous. A church in the eighteenth century was of course a public space, but a college chapel was public in a different way. In some ways, as part of the college, it was more private than a par- ish church but, at the same time, the chapel was but one of a series of connected social spaces, along with the hall and the library. This indeed was how the chapel was presented in contem- porary guidebooks by which the visitor would be taken through a sequence of rooms, includ- ing the chapel. In the late 1750s, then, a visitor to Trinity would have seen a combination of portraits, painted and sculptural, distributed through- out the college. The sheer number of recently A very puissAnt spurre 211 23 John Nevile to Cox Macro, 18 July 1755, British Library, Add. MS 32556-325557. For a transcription of the full de- scription see Baker, The Marble Index (cit. n. 6), pp. 344–45. 24 W. Wordsworth, The Prelude [1850], in: The Poetical Works of Wordsworth (eds. T. Hutchinson and E. De Sel- incourt), Oxford 1936, Book III, lines 61–63.
zurück zum  Buch Der Arkadenhof der Universität Wien und die Tradition der Gelehrtenmemoria in Europa"
Der Arkadenhof der Universität Wien und die Tradition der Gelehrtenmemoria in Europa