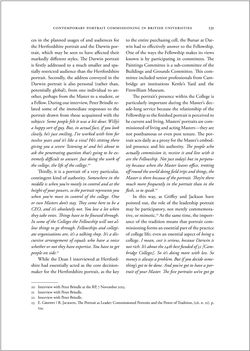 ces in the planned usages of and audiences for the Hertfordshire portrait and the Darwin por- trait, which may be seen to have affected their markedly different styles. The Darwin portrait is firstly addressed to a much smaller and spa- tially restricted audience than the Hertfordshire portrait. Secondly, the address conveyed in the Darwin portrait is also personal (rather than, potentially global), from one individual to an- other, perhaps from the Master to a student, or a Fellow. During our interview, Peter Brindle re- lated some of the immediate responses to the portrait drawn from those acquainted with the subject: Some people felt it was a bit dour. Willy’s a happy sort of guy. But, in actual fact, if you look closely, he’s just smiling. I’ve worked with him for twelve years and it’s like a viva! He’s stitting there giving you a severe ‘listening to’ and he’s about to ask the penetrating question that’s going to be ex- tremely difficult to answer. Just doing the work of the college, the life of the college.20 Thirdly, it is a portrait of a very particular, contingent kind of authority. Somewhere in the middle is when you’re mostly in control and at the height of your powers, so the portrait represents you when you’re most in control of the college. One or two Masters don’t stay. They come here to be a CEO, and it’s absolutely not. You lose a lot when they take votes. Things have to be finessed through. In some of the Colleges the Fellowship will not al- low things to go through. Fellowships and collegi- ate organisations are, it’s a talking shop. It’s a dis- cursive arrangement of equals who have a voice whether or not they have expertise. You have to get people on side.21 While the Dean I interviewed at Hertford- shire had essentially acted as the core decision- maker for the Hertfordshire portrait, as the key to the entire purchasing cell, the Bursar at Dar- win had to effectively answer to the Fellowship. One of the ways the Fellowship makes its views known is by participating in committees. The Paintings Committee is a sub-committee of the Buildings and Grounds Committee. This com- mittee included senior professionals from Cam- bridge art institutions Kettle’s Yard and the Fitzwilliam Museum. The portrait’s presence within the College is particularly important during the Master’s dec- ade-long service because the relationship of the Fellowship to the finished portrait is perceived to be current and living. Masters’ portraits are com- missioned of living and acting Masters – they are not posthumous or even post tenure. The por- trait acts daily as a proxy for the Master’s embod- ied presence and his authority. The people who actually commission it, receive it and live with it are the Fellowship. Not just today’s but in perpetu- ity because when the Master leaves office, trotting off round the world doing field trips and things, the Master is there because of the portrait. They’re there much more frequently in the portrait than in the flesh, so to speak.22 In this way, as Griffey and Jackson have pointed out, the role of the leadership portrait may be participatory, not merely commemora- tive, or mimetic.23 At the same time, the import- ance of the tradition means that portrait com- missioning forms an essential part of the practice of college life; even an essential aspect of being a college. I mean, cost is serious, because Darwin is not rich. It’s about the 24th best funded of 31 [Cam- bridge Colleges]. So it’s doing more with less. So money is always a problem. But if you decide some- thing’s got to be done. And you’ve got to have a por- trait of your Master. The five portraits we’ve got go Contemporary portrait Commissioning in British Universities 231 20 Interview with Peter Brindle at the RP, 7 November 2013. 21 Interview with Peter Brindle. 22 Interview with Peter Brindle. 23 E. Griffey / B. Jackson, The Portrait as Leader: Commissioned Portraits and the Power of Tradition, (cit. n. 21), p. 134.
zurück zum  Buch Der Arkadenhof der Universität Wien und die Tradition der Gelehrtenmemoria in Europa"
Der Arkadenhof der Universität Wien und die Tradition der Gelehrtenmemoria in Europa