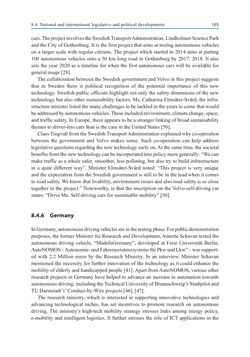 1658.4 National and international legislative and political developments cars. The project involves the Swedish Transport Administration, Lindholmen Science Park and the City of Gothenburg. It is the first project that aims at testing autonomous vehicles on a larger scale with regular citizens. The project which started in 2014 aims at putting 100 autonomous vehicles onto a 50 km long road in Gothenburg by 2017/ 2018. It also sets the year 2020 as a timeline for when the first autonomous cars will be available for general usage [28]. The collaboration between the Swedish government and Volvo in this project suggests that in Sweden there is political recognition of the potential importance of this new technology. Swedish public officials highlight not only the safety dimensions of the new technology but also other sustainability factors. Ms. Catharina Elmsäter-Svärd, the infra- structure minister listed the many challenges to be tackled in the years to come that would be addressed by autonomous vehicles. These included environment, climate change, space, and traffic safety. In Europe, there appears to be a stronger linking of broad sustainability themes to driver-less cars than is the case in the United States [50]. Claes Tingvall from the Swedish Transport Administration explained why co-operation between the government and Volvo makes sense. Such co-operation can help address legislative questions regarding the new technology early on. At the same time, the societal benefits from the new technology can be incorporated into policy more generally: “We can make traffic as a whole safer, smoother, less polluting, but also try to build infrastructure in a quite different way”. Minister Elmsäter-Svärd noted: “This project is very unique and the expectation from the Swedish government is still to be in the lead when it comes to road safety. We know that livability, environment issues and also road safety is so close together in the project.” Noteworthy, is that the inscription on the Volvo self-driving car states: “Drive Me. Self-driving cars for sustainable mobility” [50]. 8.4.6 Germany In Germany, autonomous driving vehicles are in the testing phase. For public demonstration purposes, the former Minister for Research and Development, Annette Schavan tested the autonomous driving vehicle, “MadeInGermany”, developed at Freie Universität Berlin. AutoNOMOS – Autonomie- und Fahrerassistenzsysteme für Pkw und Lkw” – was support- ed with 2.2 Million euros by the Research Ministry. In an interview, Minister Schavan mentioned the necessity for further innovation of the technology as it could enhance the mobility of elderly and handicapped people [41]. Apart from AutoNOMOS, various other research projects in Germany have helped to advance an increase in automation towards autonomous driving, including the Technical University of Braunschweig’s Stadtpilot and TU Darmstadt’s’ Conduct-by-Wire projects [46], [47]. The research ministry, which is interested in supporting innovative technologies and advancing technological niches, has set incentives to promote research on autonomous driving. The ministry’s high-tech mobility strategy stresses links among energy policy, e-mobility and intelligent logistics. It further stresses the role of ICT applications in the
zurück zum  Buch Autonomes Fahren - Technische, rechtliche und gesellschaftliche Aspekte"
Autonomes Fahren Technische, rechtliche und gesellschaftliche Aspekte
Gefördert durch die Daimler und Benz Stiftung