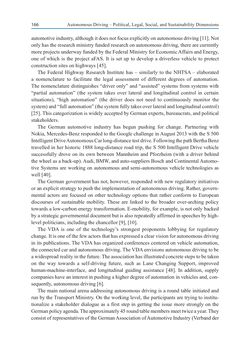 Autonomous Driving – Political, Legal, Social, and Sustainability Dimensions166 automotive industry, although it does not focus explicitly on autonomous driving [11]. Not only has the research ministry funded research on autonomous driving, there are currently more projects underway funded by the Federal Ministry for Economic Affairs and Energy, one of which is the project aFAS. It is set up to develop a driverless vehicle to protect construction sites on highways [45]. The Federal Highway Research Institute has – similarly to the NHTSA – elaborated a nomenclature to facilitate the legal assessment of different degrees of automation. The nomenclature distinguishes “driver only” and “assisted” systems from systems with “partial automation” (the system takes over lateral and longitudinal control in certain situations), “high automation” (the driver does not need to continuously monitor the system) and “full automation” (the system fully takes over lateral and longitudinal control) [25]. This categorization is widely accepted by German experts, bureaucrats, and political stakeholders. The German automotive industry has begun pushing for change. Partnering with Nokia, Mercedes-Benz responded to the Google challenge in August 2013 with the S 500 Intelligent Drive Autonomous Car long-distance test drive. Following the path Bertha Benz travelled in her historic 1888 long-distance road trip, the S 500 Intelligent Drive vehicle successfully drove on its own between Mannheim and Pforzheim (with a driver behind the wheel as a back-up). Audi, BMW, and auto-suppliers Bosch and Continental Automo- tive Systems are working on autonomous and semi-autonomous vehicle technologies as well [40]. The German government has not, however, responded with new regulatory initiatives or an explicit strategy to push the implementation of autonomous driving. Rather, govern- mental actors are focused on other technology options that rather conform to European discourses of sustainable mobility. These are linked to the broader over-arching policy towards a low-carbon energy transformation. E-mobility, for example, is not only backed by a strategic governmental document but is also repeatedly affirmed in speeches by high- level politicians, including the chancellor [9], [10]. The VDA is one of the technology’s strongest proponents lobbying for regulatory change. It is one of the few actors that has expressed a clear vision for autonomous driving in its publications. The VDA has organized conferences centered on vehicle automation, the connected car and autonomous driving. The VDA envisions autonomous driving to be a widespread reality in the future. The association has illustrated concrete steps to be taken on the way towards a self-driving future, such as Lane Changing Support, improved human-machine-interface, and longitudinal guiding assistance [48]. In addition, supply companies have an interest in pushing a higher degree of automation in vehicles and, con- sequently, autonomous driving [6]. The main national arena addressing autonomous driving is a round table initiated and run by the Transport Ministry. On the working level, the participants are trying to institu- tionalize a stakeholder dialogue as a first step in getting the issue more strongly on the German policy agenda. The approximately 45 round table members meet twice a year. They consist of representatives of the German Association of Automotive Industry ( Verband der
zurück zum  Buch Autonomes Fahren - Technische, rechtliche und gesellschaftliche Aspekte"
Autonomes Fahren Technische, rechtliche und gesellschaftliche Aspekte
Gefördert durch die Daimler und Benz Stiftung