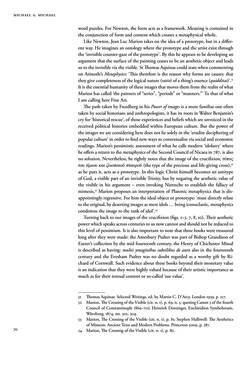 70 michaEl a. michaEl word puzzles. For Newton, the form acts as a framework. Meaning is contained in the conjunction of form and content which creates a metaphysical whole. Like Newton, Jean Luc Marion takes on the idea of a prototype, but in a differ- ent way. He imagines an ontology where the prototype and the artist exist through the ‘invisible counter-gaze of the prototype’. By this he appears to be developing an argument that the surface of the painting ceases to be an aesthetic object and leads us to the invisible via the visible. St Thomas Aquinas could state when commenting on Aristotle’s Metaphysics: ‘This therefore is the reason why forms are causes: that they give completeness of the logical nature (ratio) of a thing’s essence (quidditas)’.51 It is the essential humanity of these images that moves them from the realm of what Marion has called ‘the painters of “series”, “periods” or “manners.”’ To that of what I am calling here Fine Art. The path taken by Freedberg in his Power of images is a more familiar one often taken by social historians and anthropologists, it has its roots in Walter Benjamin’s cry for ‘historical rescue’, of those experiences and beliefs which are unvoiced in the received political histories embedded within European culture. But the power of the images we are considering here does not lie solely in the ‘erudite deciphering of popular culture’ in order to find new ways to contextualise via social and economic readings. Marion’s pessimistic assessment of what he calls modern ‘idolatry’ where he offers a return to the metaphysics of the Second Council of Nicaea in 787, is also no solution. Nevertheless, he rightly notes that the image of the crucifixion, τύπος του τίμιου και ζωοποιού σταυρού (the type of the precious and life-giving cross),52 as he puts it, acts as a prototype. In this logic Christ himself becomes an antitype of God, a visible part of an invisible Trinity, but by negating the aesthetic value of the visible in his argument – even invoking Nietzsche to establish the fallacy of mimesis,53 Marion proposes an interpretation of Platonic metaphysics that is dis- appointingly regressive. For him the ideal object or prototype: ‘must directly relate to the original, by deserting images as mere idols … being iconoclastic, metaphysics condemns the image to the rank of idol’.54 Turning back to our images of the crucifixion (figs. 1–3, 7, 8, 10). Their aesthetic power which speaks across centuries to us now cannot and should not be reduced to this level of pessimism. It is also important to note that these books were treasured long after they were made: the Amesbury Psalter was part of Bishop Grandison of Exeter’s collection by the mid fourteenth century, the Henry of Chichester Missal is described as having: multis ymaginibus subtilibus de auro also in the fourteenth century and the Evesham Psalter was no doubt regarded as a worthy gift by Ri- chard of Cornwall. Such evidence about these books beyond their monetary value is an indication that they were highly valued because of their artistic importance as much as for their textual content or so-called ‘use value’. 51 Thomas Aquinas: Selected Writings, ed. by Martin C. D’Arcy, London 1939, p. 157. 52 Marion, The Crossing of the Visible (cit. n. 1), p. 69, n. 5, quoting Canon 3 of the fourth Council of Constantinople (869–70); Heinrich Denzinger, Enchiridion Symbolorum, Würzburg, 1874, nn. 302, 304. 53 Marion, The Crossing of the Visible (cit. n. 1), p. 81; Stephen Halliwell: The Aesthetics of Mimesis: Ancient Texts and Modern Problems. Princeton 2009, p. 387. 54 Marion, The Crossing of the Visible (cit. n. 1), p. 80.
zurück zum  Buch Europäische Bild- und Buchkultur im 13. Jahrhundert"
Europäische Bild- und Buchkultur im 13. Jahrhundert