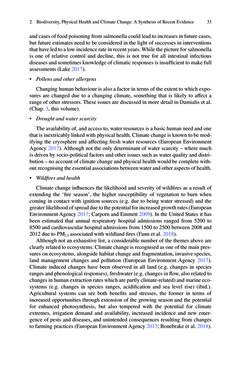 33 and cases of food poisoning from salmonella could lead to increases in future cases, but future estimates need to be considered in the light of successes in interventions that have led to a low incidence rate in recent years. While the picture for salmonella is one of relative control and decline, this is not true for all intestinal infectious diseases and sometimes knowledge of climatic responses is insufficient to make full assessments (Lake 2017). • Pollens and other allergens Changing human behaviour is also a factor in terms of the extent to which expo- sures are changed due to a changing climate, something that is likely to affect a range of other stressors. These issues are discussed in more detail in Damialis et  al. (Chap. 3, this volume). • Drought and water scarcity The availability of, and access to, water resources is a basic human need and one that is inextricably linked with physical health. Climate change is known to be mod- ifying the cryosphere and affecting fresh water resources (European Environment Agency 2017). Although not the only determinant of water scarcity  – where much is driven by socio-political factors and other issues such as water quality and distri- bution  – no account of climate change and physical health would be complete with- out recognising the essential associations between water and other aspects of health. • Wildfires and health Climate change influences the likelihood and severity of wildfires as a result of extending the ‘fire season’, the higher susceptibility of vegetation to burn when coming in contact with ignition sources (e.g. due to being water stressed) and the greater likelihood of spread due to the potential for increased growth rates (European Environment Agency 2017; Carporn and Emmett 2009). In the United States it has been estimated that annual respiratory hospital admissions ranged from 5200 to 8500 and cardiovascular hospital admissions from 1500 to 2500 between 2008 and 2012 due to PM2.5 associated with wildland fires (Fann et  al. 2018). Although not an exhaustive list, a considerable number of the themes above are clearly related to ecosystems. Climate change is recognised as one of the main pres- sures on ecosystems, alongside habitat change and fragmentation, invasive species, land management changes and pollution (European Environment Agency 2017). Climate induced changes have been observed in all land (e.g. changes in species ranges and phenological responses), freshwater (e.g. changes in flow, also related to changes in human extraction rates which are partly climate-related) and marine eco- systems (e.g. changes in species ranges, acidification and sea level rise) (ibid.). Agricultural systems can see both benefits and stresses, the former in terms of increased opportunities through extension of the growing season and the potential for enhanced photosynthesis, but also tempered with the potential for climate extremes, irrigation demand and availability, increased incidence and new emer- gence of pests and diseases, and unintended consequences resulting from changes to farming practices  (European Environment Agency 2017; Bonebrake et  al. 2018). 2 Biodiversity, Physical Health and  Climate Change: A  Synthesis of  Recent Evidence
zurück zum  Buch Biodiversity and Health in the Face of Climate Change"
Biodiversity and Health in the Face of Climate Change