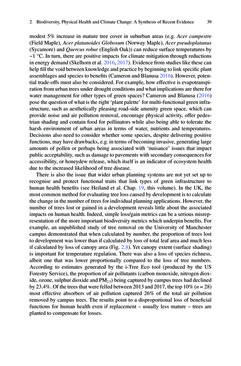 39 modest 5% increase in mature tree cover in suburban areas (e.g. Acer campestre (Field Maple), Acer platanoides Globosum (Norway Maple), Acer pseudoplatanus (Sycamore) and Quercus robur (English Oak)) can reduce surface temperatures by ~1  °C.  In turn, there are positive impacts for climate mitigation through reductions in energy demand (Skelhorn et  al. 2016, 2017). Evidence from studies like these can help fill the void between knowledge and practice by beginning to link specific plant assemblages and species to benefits (Cameron and Blanusa 2016). However, poten- tial trade-offs must also be considered. For example, how effective is evapotranspi- ration from urban trees under drought conditions and what implications are there for water management for other types of green spaces? Cameron and Blanusa (2016) pose the question of what is the right ‘plant palette’ for multi-functional green infra- structure, such as aesthetically pleasing road-side amenity green space, which can provide noise and air pollution removal, encourage physical activity, offer pedes- trian shading and contain food for pollinators while also being able to tolerate the harsh environment of urban areas in terms of water, nutrients and temperatures. Decisions also need to consider whether some species, despite delivering positive functions, may have drawbacks, e.g. in terms of becoming invasive, generating large amounts of pollen or perhaps being associated with ‘nuisance’ issues that impact public acceptability, such as damage to pavements with secondary consequences for accessibility, or honeydew release, which itself is an indicator of ecosystem health due to the increased likelihood of tree disease. There is also the issue that wider urban planning systems are not yet set up to recognise and protect functional traits that link types of green infrastructure to human health benefits (see Heiland et  al. Chap. 19, this volume). In the UK, the most common method for evaluating tree loss caused by development is to calculate the change in the number of trees for individual planning applications. However, the number of trees lost or gained in a development reveals little about the associated impacts on human health. Indeed, simple loss/gain metrics can be a serious misrep- resentation of the more important biodiversity metrics which underpin benefits. For example, an unpublished study of tree removal on the University of Manchester campus demonstrated that when calculated by number, the proportion of trees lost to development was lower than if calculated by loss of total leaf area and much less if calculated by loss of canopy area (Fig.  2.8). Yet canopy extent (surface shading) is important for temperature regulation. There was also a loss of species richness, albeit one that was lower proportionally compared to the loss of tree numbers. According to estimates generated by the i-Tree Eco tool (produced by the US Forestry Service), the proportion of air pollutants (carbon monoxide, nitrogen diox- ide, ozone, sulphur dioxide and PM2.5) being captured by campus trees had declined by 23.4%. Of the trees that were felled between 2013 and 2017, the top 10% (n  =  28) most effective absorbers of air pollution captured 26% of the total air pollution removed by campus trees. The results point to a disproportional loss of beneficial functions for human health even if replacement  – usually less mature  – trees are planted to compensate for losses. 2 Biodiversity, Physical Health and  Climate Change: A  Synthesis of  Recent Evidence
zurück zum  Buch Biodiversity and Health in the Face of Climate Change"
Biodiversity and Health in the Face of Climate Change