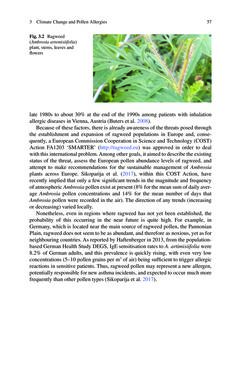 57 late 1980s to about 30% at the end of the 1990s among patients with inhalation allergic diseases in Vienna, Austria (Buters et  al. 2008). Because of these factors, there is already awareness of the threats posed through the establishment and expansion of ragweed populations in Europe and, conse- quently, a European Commission Cooperation in Science and Technology (COST) Action FA1203 ‘SMARTER’ (http://ragweed.eu) was approved in order to deal with this international problem. Among other goals, it aimed to describe the existing status of the threat, assess the European pollen abundance levels of ragweed, and attempt to make recommendations for the sustainable management of Ambrosia plants across Europe. Sikoparija et  al. (2017), within this COST Action, have recently implied that only a few significant trends in the magnitude and frequency of atmospheric Ambrosia pollen exist at present (8% for the mean sum of daily aver- age Ambrosia pollen concentrations and 14% for the mean number of days that Ambrosia pollen were recorded in the air). The direction of any trends (increasing or decreasing) varied locally. Nonetheless, even in regions where ragweed has not yet been established, the probability of this occurring in the near future is quite high. For example, in Germany, which is located near the main source of ragweed pollen, the Pannonian Plain, ragweed does not seem to be as abundant, and therefore as noxious, yet as for neighbouring countries. As reported by Haftenberger in 2013, from the population- based German Health Study DEGS, IgE sensitisation rates to A. artimisiifolia were 8.2% of German adults, and this prevalence is quickly rising, with even very low concentrations (5–10 pollen grains per m3 of air) being sufficient to trigger allergic reactions in sensitive patients. Thus, ragweed pollen may represent a new allergen, potentially responsible for new asthma incidents, and expected to occur much more frequently than other pollen types (Sikoparija et  al. 2017). Fig. 3.2 Ragweed (Ambrosia artemisiifolia) plant, stems, leaves and flowers 3 Climate Change and  Pollen Allergies
zurück zum  Buch Biodiversity and Health in the Face of Climate Change"
Biodiversity and Health in the Face of Climate Change