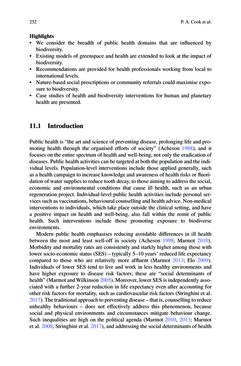 252 Highlights • We consider the breadth of public health domains that are influenced by biodiversity. • Existing models of greenspace and health are extended to look at the impact of biodiversity. • Recommendations are provided for health professionals working from local to international levels. • Nature-based social prescriptions or community referrals could maximise expo- sure to biodiversity. • Case studies of health and biodiversity interventions for human and planetary health are presented. 11.1 Introduction Public health is “the art and science of preventing disease, prolonging life and pro- moting health through the organised efforts of society” (Acheson 1988), and it focuses on the entire spectrum of health and well-being, not only the eradication of diseases. Public health activities can be targeted at both the population and the indi- vidual levels. Population-level interventions include those applied generally, such as a health campaign to increase knowledge and awareness of health risks or fluori- dation of water supplies to reduce tooth decay, to those aiming to address the social, economic and environmental conditions that cause ill health, such as an urban regeneration project. Individual-level public health activities include personal ser- vices such as vaccinations, behavioural counselling and health advice. Non-medical interventions to individuals, which take place outside the clinical setting, and have a positive impact on health and well-being, also fall within the remit of public health. Such interventions include those promoting exposure to biodiverse environments. Modern public health emphasises reducing avoidable differences in ill health between the most and least well-off in society (Acheson 1998; Marmot 2010). Morbidity and mortality rates are consistently and starkly higher among those with lower socio-economic status (SES)  – typically 5–10  years’ reduced life expectancy compared to those who are relatively more affluent (Marmot 2013; Elo 2009). Individuals of lower SES tend to live and work in less healthy environments and have higher exposure to disease risk factors; these are “social determinants of health” (Marmot and Wilkinson 2005). Moreover,  lower SES is independently asso- ciated with a further 2-year reduction in life expectancy even after accounting for other risk factors for mortality, such as cardiovascular risk factors (Stringhini et  al. 2017). The traditional approach to preventing disease  – that is, counselling to reduce unhealthy behaviours  – does not effectively address this phenomenon, because social and physical environments and circumstances mitigate behaviour change. Such inequalities are high on the political agenda (Marmot 2010, 2013; Marmot et  al. 2008; Stringhini et  al. 2017), and addressing the social determinants of health P. A. Cook et al.
zurück zum  Buch Biodiversity and Health in the Face of Climate Change"
Biodiversity and Health in the Face of Climate Change