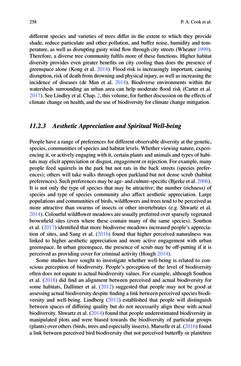 258 different species and varieties of trees differ in the extent to which they provide shade, reduce particulate and other pollution, and buffer noise, humidity and tem- perature, as well as disrupting gusty wind flow through city streets (Wheater 1999). Therefore, a diverse tree community fulfils more of these functions. Higher habitat diversity provides even greater benefits on city cooling than does the presence of greenspace alone (Kong et  al. 2014). Flood risk is increasingly important, causing disruption, risk of death from drowning and physical injury, as well as increasing the incidence of diseases (de Man et  al. 2014). Biodiverse environments within the watersheds surrounding an urban area can help moderate flood risk (Carter et  al. 2017). See Lindley et  al. Chap. 2, this volume, for further discussion on the effects of climate change on health, and the use of biodiversity for climate change mitigation. 11.2.3 Aesthetic Appreciation and  Spiritual Well-being People have a range of preferences for different observable diversity at the genetic, species, communities of species and habitat levels. Whether viewing nature, experi- encing it, or actively engaging with it, certain plants and animals and types of habi- tats may elicit appreciation or disgust, engagement or rejection. For example, many people feed squirrels in the park but not rats in the back streets (species prefer- ences); others will take walks through open parkland but not dense scrub (habitat preferences). Such preferences may be age- and culture-specific (Bjerke et  al. 2006). It is not only the type of species that may be attractive; the number (richness) of species and type of species community also affect aesthetic appreciation. Large populations and communities of birds, wildflowers and trees tend to be perceived as more attractive than swarms of insects or other invertebrates (e.g. Shwartz et  al. 2014). Colourful wildflower meadows are usually preferred over sparsely vegetated brownfield sites (even where these contain many of the same species). Southon et  al. (2017) identified that more biodiverse meadows increased people’s apprecia- tion of sites, and Sang et  al. (2016) found that higher perceived naturalness was linked to higher aesthetic appreciation and more active engagement with urban greenspace. In urban greenspace, the presence of scrub may be off-putting if it is perceived as providing cover for criminal activity (Hough 2014). Some studies have sought to investigate whether well-being is related to con- scious perception of biodiversity. People’s perception of the level of biodiversity often does not equate to actual biodiversity values. For example, although Southon et  al. (2018) did find an alignment between perceived and actual biodiversity for some habitats, Dallimer et  al. (2012) suggested that people may not be good at assessing actual biodiversity despite finding a link between perceived species biodi- versity and well-being. Lindberg (2012) established that people will distinguish between spaces of differing quality but do not necessarily align these with actual biodiversity. Shwartz et  al. (2014) found that people underestimated biodiversity in manipulated plots and were biased towards the biodiversity of particular groups (plants) over others (birds, trees and especially insects). Marselle et  al. (2016) found a link between perceived bird biodiversity (but not perceived butterfly or plant/tree P. A. Cook et al.
zurück zum  Buch Biodiversity and Health in the Face of Climate Change"
Biodiversity and Health in the Face of Climate Change