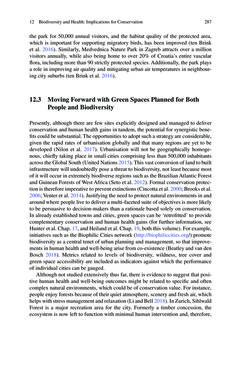 287 the park for 50,000 annual visitors, and the habitat quality of the protected area, which is important for supporting migratory birds, has been improved (ten Brink et  al. 2016). Similarly, Medvednica Nature Park in Zagreb attracts over a million visitors annually, while also being home to over 20% of Croatia’s entire vascular flora, including more than 90 strictly protected species. Additionally, the park plays a role in improving air quality and mitigating urban air temperatures in neighbour- ing city suburbs (ten Brink et  al. 2016). 12.3 Moving Forward with  Green Spaces Planned for  Both People and  Biodiversity Presently, although there are few sites explicitly designed and managed to deliver conservation and human health gains in tandem, the potential for synergistic bene- fits could be substantial. The opportunities to adopt such a strategy are considerable, given the rapid rates of urbanisation globally and that many regions are yet to be developed (Nilon et  al. 2017). Urbanisation will not be geographically homoge- nous, chiefly taking place in small cities comprising less than 500,000 inhabitants across the Global South (United Nations 2015). This vast conversion of land to built infrastructure will undoubtedly pose a threat to biodiversity, not least because most of it will occur in extremely biodiverse regions such as the Brazilian Atlantic Forest and Guinean Forests of West Africa (Seto et  al. 2012). Formal conservation protec- tion is therefore imperative to prevent extinctions (Cincotta et  al. 2000; Brooks et  al. 2006; Venter et  al. 2014). Justifying the need to protect natural environments in and around where people live to deliver a multi-faceted suite of objectives is more likely to be persuasive to decision-makers than a rationale based solely on conservation. In already established towns and cities, green spaces can be ‘retrofitted’ to provide complementary conservation and human health gains (for further information, see Hunter et  al. Chap. 17, and Heiland et  al. Chap. 19, both  this volume). For example, initiatives such as the Biophilic Cities network (http://biophiliccities.org/) promote biodiversity as a central tenet of urban planning and management, so that improve- ments in human health and well-being arise from co-existence (Beatley and van den Bosch 2018). Metrics related to levels of biodiversity, wildness, tree cover and green space accessibility are included as indicators against which the performance of individual cities can be gauged. Although not studied extensively thus far, there is evidence to suggest that posi- tive human health and well-being outcomes might be related to specific and often complex natural environments, which could be of conservation value. For instance, people enjoy forests because of their quiet atmosphere, scenery and fresh air, which helps with stress management and relaxation (Li and Bell 2018). In Zurich, Sihlwald Forest is a major recreation area for the city. Formerly a timber concession, the ecosystem is now left to function with minimal human intervention and, therefore, 12 Biodiversity and  Health: Implications for  Conservation
zurück zum  Buch Biodiversity and Health in the Face of Climate Change"
Biodiversity and Health in the Face of Climate Change