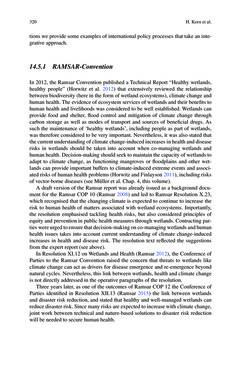 320 tions we provide some examples of international policy processes that take an inte- grative approach. 14.5.1 RAMSAR-Convention In 2012, the Ramsar Convention published a Technical Report “Healthy wetlands, healthy people” (Horwitz et  al. 2012) that extensively reviewed the relationship between biodiversity (here in the form of wetland  ecosystems), climate change and human health. The evidence of ecosystem services of wetlands and their benefits to human health and livelihoods was considered to be well established. Wetlands can provide food and shelter, flood control and mitigation of climate change through carbon storage as well as modes of transport and sources of beneficial drugs. As such the maintenance of ‘healthy wetlands’, including people as part of wetlands, was therefore considered to be very important. Nevertheless, it was also stated that the current understanding of climate change-induced increases in health and disease risks in wetlands should be taken into account when co-managing wetlands and human health. Decision-making should seek to maintain the capacity of wetlands to adapt to climate change, as functioning mangroves or floodplains and other wet- lands can provide important buffers to climate-induced extreme events and associ- ated risks of human health problems (Horwitz and Finlayson 2011), including risks of vector-borne diseases (see Müller et  al. Chap. 4, this volume). A draft version of the Ramsar report was already issued as a background docu- ment for the Ramsar COP 10 (Ramsar 2008) and led to Ramsar Resolution X.23, which recognised that the changing climate is expected to continue to increase the risk to human health of matters associated with wetland ecosystems. Importantly, the resolution emphasised tackling health risks, but also considered principles of equity and prevention in public health measures through wetlands. Contracting par- ties were urged to ensure that decision-making on co-managing wetlands and human health issues takes into account current understanding of climate change-induced increases in health and disease risk. The resolution text reflected the suggestions from the expert report (see above). In Resolution XI.12 on Wetlands and Health (Ramsar 2012), the Conference of Parties to the Ramsar Convention raised the concern that threats to wetlands like climate change can act as drivers for disease emergence and re-emergence beyond natural cycles. Nevertheless, this link between wetlands, health and climate change is not directly addressed in the operative paragraphs of the resolution. Three years later, as one of the outcomes of Ramsar COP 12 the Conference of Parties identified in Resolution XII.13 (Ramsar 2015) the link between wetlands and disaster risk reduction, and stated that healthy and well-managed wetlands can reduce disaster risk. Since many risks are expected to increase with climate change, joint work between technical and nature-based solutions to disaster risk reduction will be needed to secure human health. H. Korn et al.
zurück zum  Buch Biodiversity and Health in the Face of Climate Change"
Biodiversity and Health in the Face of Climate Change