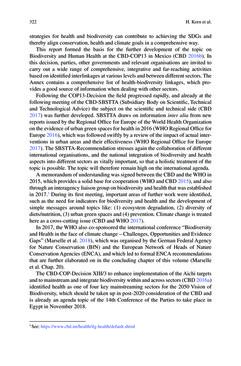 322 strategies for health and biodiversity can contribute to achieving the SDGs and thereby align conservation, health and climate goals in a comprehensive way. This report formed the basis for the further development of the topic on Biodiversity and Human Health at the CBD-COP13  in Mexico (CBD 2016b). In this decision, parties, other governments and relevant organisations are invited to carry out a wide range of comprehensive, integrative and far-reaching activities based on identified interlinkages at various levels and between different sectors. The Annex contains a comprehensive list of health-biodiversity linkages, which pro- vides a good source of information when dealing with other sectors. Following the COP13-Decision the field progressed rapidly, and already at the following meeting of the CBD-SBSTTA (Subsidiary Body on Scientific, Technical and Technological Advice) the subject on the scientific and technical side (CBD 2017) was further developed. SBSTTA draws on information inter alia from new reports issued by the Regional Office for Europe of the World Health Organization on the evidence of urban green spaces for health in 2016 (WHO Regional Office for Europe 2016), which was followed swiftly by a review of the impact of actual inter- ventions in urban areas and their effectiveness (WHO Regional Office for Europe 2017). The SBSTTA-Recommendation stresses again the collaboration of different international organisations, and the national integration of biodiversity and health aspects into different sectors as vitally important, so that a holistic treatment of the topic is possible. The topic will therefore remain high on the international agenda. A memorandum of understanding was signed between the CBD and the WHO in 2015, which provides a solid base for cooperation (WHO and CBD 2015), and also through an interagency liaison group on biodiversity and health that was established in 2017.5 During its first meeting, important areas of further work were identified, such as the need for indicators for biodiversity and health and the development of simple messages around topics like: (1) ecosystem degradation, (2) diversity of diets/nutrition, (3) urban green spaces and (4) prevention. Climate change is treated here as a cross-cutting issue (CBD and WHO 2017). In 2017, the WHO also co-sponsored the international conference “Biodiversity and Health in the face of climate change  – Challenges, Opportunities and Evidence Gaps” (Marselle et  al. 2018), which was organised by the German Federal Agency for Nature  Conservation (BfN) and the European Network of Heads of Nature Conservation Agencies (ENCA), and which led to formal ENCA recommendations that are further elaborated on in the concluding chapter of this volume (Marselle et  al. Chap. 20). The CBD-COP-Decision XIII/3 to enhance implementation of the Aichi targets and to mainstream and integrate biodiversity within and across sectors (CBD 2016a) identified health as one of four key mainstreaming sectors for the 2050 Vision of Biodiversity, which should be taken up in post-2020 consideration of the CBD and is already an agenda topic of the 14th Conference of the Parties to take place in Egypt in November 2018. 5 See: https://www.cbd.int/health/ilg-health/default.shtml H. Korn et al.
zurück zum  Buch Biodiversity and Health in the Face of Climate Change"
Biodiversity and Health in the Face of Climate Change