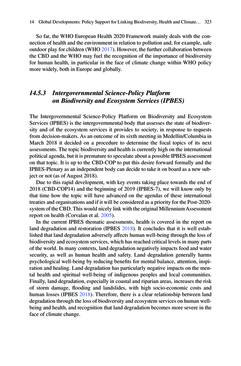 323 So far, the WHO European Health 2020 Framework mainly deals with the con- nection of health and the environment in relation to pollution and, for example, safe outdoor play for children (WHO 2017). However, the further collaboration between the CBD and the WHO may fuel the recognition of the importance of biodiversity for human health, in particular in the face of climate change within WHO policy more widely, both in Europe and globally. 14.5.3 Intergovernmental Science-Policy Platform on  Biodiversity and  Ecosystem Services (IPBES) The Intergovernmental Science-Policy Platform on Biodiversity and Ecosystem Services (IPBES) is the intergovernmental body that assesses the state of biodiver- sity and of the ecosystem services it provides to society, in response to requests from decision-makers. As an outcome of its sixth meeting in Medellin/Columbia in March 2018 it decided on a procedure to determine the focal topics of its next assessments. The topic biodiversity and health is currently high on the international political agenda, but it is premature to speculate about a possible IPBES assessment on that topic. It is up to the CBD-COP to put this desire forward formally and the IPBES-Plenary as an independent body can decide to take it on board as a new sub- ject or not (as of August 2018). Due to this rapid development, with key events taking place towards the end of 2018 (CBD-COP14) and the beginning of 2019 (IPBES-7), we will know only by that time how the topic will have advanced on the agendas of these international treaties and organisations and if it will be considered as a priority for the Post-2020- system of the CBD.  This would nicely link with the original Millennium Assessment report on health  (Corvalan et  al. 2005). In the current IPBES thematic assessments, health is covered in the report on land degradation and restoration (IPBES 2018). It concludes that it is well estab- lished that land degradation adversely affects human well-being through the loss of biodiversity and ecosystem services, which has reached critical levels in many parts of the world. In many contexts, land degradation negatively impacts food and water security, as well as human health and safety. Land degradation generally harms psychological well-being by reducing benefits for mental balance, attention, inspi- ration and healing. Land degradation has particularly negative impacts on the men- tal health and spiritual well-being of indigenous peoples and local communities. Finally, land degradation, especially in coastal and riparian areas, increases the risk of storm damage, flooding and landslides, with high socio-economic costs and human losses (IPBES 2018). Therefore, there is a clear relationship between land degradation through the loss of biodiversity and ecosystem services on human well- being and health, and recognition that land degradation becomes more severe in the face of climate change. 14 Global Developments: Policy Support for  Linking Biodiversity, Health and  Climate…
zurück zum  Buch Biodiversity and Health in the Face of Climate Change"
Biodiversity and Health in the Face of Climate Change