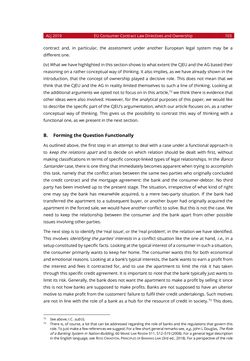 ALJ 2019 EU Consumer Contract Law Directives and Ownership 103 contract and, in particular, the assessment under another European legal system may be a different one. (iv) What we have highlighted in this section shows to what extent the CJEU and the AG based their reasoning on a rather conceptual way of thinking. It also implies, as we have already shown in the introduction, that the concept of ownership played a decisive role. This does not mean that we think that the CJEU and the AG in reality limited themselves to such a line of thinking. Looking at the additional arguments we opted not to focus on in this article,72 we think there is evidence that other ideas were also involved. However, for the analytical purposes of this paper, we would like to describe the specific part of the CJEU’s argumentation, which our article focuses on, as a rather conceptual way of thinking. This gives us the possibility to contrast this way of thinking with a functional one, as we present in the next section. B. Forming the Question Functionally As outlined above, the first step in an attempt to deal with a case under a functional approach is to keep the relations apart and to decide on which relation should be dealt with first, without making classifications in terms of specific concept-linked types of legal relationships. In the Banco Santander case, there is one thing that immediately becomes apparent when trying to accomplish this task, namely that the conflict arises between the same two parties who originally concluded the credit contract and the mortgage agreement: the bank and the consumer-debtor. No third party has been involved up to the present stage. The situation, irrespective of what kind of right one may say the bank has meanwhile acquired, is a mere two-party situation. If the bank had transferred the apartment to a subsequent buyer, or another buyer had originally acquired the apartment in the forced sale, we would have another conflict to solve. But this is not the case. We need to keep the relationship between the consumer and the bank apart from other possible issues involving other parties. The next step is to identify the ‘real issue’, or the ‘real problem’, in the relation we have identified. This involves identifying the parties’ interests in a conflict situation like the one at hand, i.e., in a setup constituted by specific facts. Looking at the typical interest of a consumer in such a situation, the consumer primarily wants to keep her home. The consumer wants this for both economical and emotional reasons. Looking at a bank’s typical interests, the bank wants to earn a profit from the interest and fees it contracted for, and to use the apartment to limit the risk it has taken through this specific credit agreement. It is important to note that the bank typically just wants to limit its risk. Generally, the bank does not want the apartment to make a profit by selling it since this is not how banks are supposed to make profits. Banks are not supposed to have an ulterior motive to make profit from the customers’ failure to fulfil their credit undertakings. Such motives are not in line with the role of a bank as a hub for the resource of credit in society.73 This does, 72 See above, I.C. sub (i). 73 There is, of course, a lot that can be addressed regarding the role of banks and the regulations that govern this role. To just make a few references we suggest: For a few short general remarks see, e.g., John L Douglas, The Role of a Banking System in Nation-Building, 60 MAINE LAW REVIEW 511, 512–519 (2008). For a general legal description in the English language, see ROSS CRANSTON, PRINCIPLES OF BANKING LAW (3rd ed., 2018). For a perspective of the role
back to the  book Austrian Law Journal, Volume 1/2019"
Austrian Law Journal Volume 1/2019