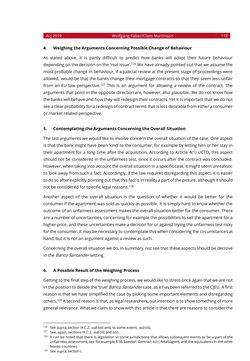 ALJ 2019 Wolfgang Faber/Claes Martinson 118 4. Weighing the Arguments Concerning Possible Change of Behaviour As stated above, it is partly difficult to predict how banks will adapt their future behaviour depending on the decision on the ‘real issue’.126 We have already pointed out that we assume the most probable change in behaviour, if a judicial review at the present stage of proceedings were allowed, would be that the banks change their mortgage contracts so that they seem less unfair from an EU law perspective.127 This is an argument for allowing a review of the contract. The arguments that point in the opposite direction are, however, also plausible. We do not know how the banks will behave and how they will redesign their contracts. Yet it is important that we do not see a clear probability for a redesign of contract terms that is less desirable from either a consumer or market related perspective. 5. Contemplating the Arguments Concerning the Overall Situation The last arguments we would like to involve concern the overall situation of the case. One aspect is that the bank might have been ‘kind’ to the consumer, for example by letting him or her stay in their apartment for a long time after the acquisition. According to Article 4(1) UCTD, this aspect should not be considered in the unfairness test, since it occurs after the contract was concluded. However, when taking into account the overall situation in a specific case, it might seem unrealistic to look away from such a fact. Accordingly, if the law requires disregarding this aspect, it is easier to do so after explicitly pointing out that this fact is in reality a part of the picture, although it should not be considered for specific legal reasons.128 Another aspect of the overall situation is the question of whether it would be better for the consumer if the apartment was sold as quickly as possible. It is simply hard to know whether the outcome of an unfairness assessment makes the overall situation better for the consumer. There are a number of uncertainties, concerning for example the possibilities to sell the apartment for a higher price, and these uncertainties make a decision for or against trying the unfairness test risky for the consumer. It may be necessary to contemplate this when considering the circumstances at hand, but it is not an argument against a review as such. Concerning the overall situation we do, in summary, not see that these aspects should be decisive in the Banco Santander setting. 6. A Possible Result of the Weighing Process Getting to the final step of the weighing process, we would like to stress once again that we are not in the position to decide the ‘true’ Banco Santander case, as it has been referred to the CJEU. A first reason is that we have simplified the case by picking some important elements and disregarding others.129 A second reason is that, as legal researchers, our intention is to show something of more general relevance. What we claim to show with this article is that there are reasons to consider the 126 See supra, section III.C.2. sub (vii) and, to some extent, sub (iii). 127 See, again, sections III.C.2. sub (iii) and (vii). 128 It can be noted that there is legislation in some jurisdictions that allows subsequent events to be a part of the unfairness assessment; see for example § 36 Swedish Contract Act (Avtalslagen), and the equivalents in the other Nordic countries. 129 See supra, section I.
back to the  book Austrian Law Journal, Volume 1/2019"
Austrian Law Journal Volume 1/2019