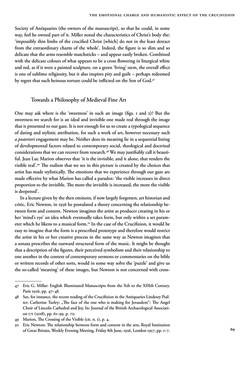 69 thE Emotional charGE and humanistic EffEct of thE crucifixion Society of Antiquaries (the owners of the manuscript), so that he could, in some way, feel he owned part of it. Miller noted the characteristics of Christ’s body the: ‘impossibly thin limbs of the crucified Christ [which] do not in the least detract from the extraordinary charm of the whole’. Indeed, the figure is so slim and so delicate that the arms resemble matchsticks – and appear easily broken. Combined with the delicate colours of what appears to be a cross flowering in liturgical white and red, as if it were a painted sculpture, on a green ‘living’ stem, the overall effect is one of sublime religiosity, but it also inspires pity and guilt – perhaps redeemed by regret that such heinous torture could be inflicted on the Son of God.47 Towards a Philosophy of Medieval Fine Art One may ask where is the ‘sweetness’ in such an image (figs. 1 and 2)? But the sweetness we search for is an ideal and invisible one made real through the image that is presented to our gaze. It is not enough for us to create a typological sequence of dating and stylistic attribution, for such a work of art, however necessary such a posteriori engagement may be. Neither does its meaning lie in a sequential listing of developmental factors related to contemporary social, theological and doctrinal considerations that we can recover from research.48 We may justifiably call it beauti- ful. Jean Luc Marion observes that ‘it is the invisible, and it alone, that renders the visible real’.49 The realism that we see in this picture is created by the choices that artist has made stylistically. The emotions that we experience through our gaze are made effective by what Marion has called a paradox: ‘the visible increases in direct proportion to the invisible. The more the invisible is increased, the more the visible is deepened’. In a lecture given by the then eminent, if now largely forgotten, art historian and critic, Eric Newton, in 1956 he postulated a theory concerning the relationship be- tween form and content. Newton imagines the artist as producer creating in his or her ‘mind’s eye’ an idea which eventually takes form, but only within a set param- eter which he likens to a musical form.50 In the case of the Crucifixion, it would be easy to imagine that the form is a prescribed prototype and therefore would restrict the artist in his or her creative process in the same way as Newton imagines that a sonata prescribes the outward structural form of the music. It might be thought that a description of the figures, their perceived symbolism and their relationship to one another in the context of contemporary sermons or commentaries on the bible or written records of other sorts, would in some way solve the ‘puzzle’ and give us the so-called ‘meaning’ of these images, but Newton is not concerned with cross- 47 Eric G. Millar: English Illuminated Manuscripts from the Xth to the XIIIth Century. Paris 1926, pp. 47–48. 48 See, for instance, the recent reading of the Crucifixion in the Antiquaries Lindesey Psal- ter: Catherine Turley: „The face of the one who is making for Jerusalem“: The Angel Choir of Lincoln Cathedral and Joy. In: Journal of the British Archaeological Associati- on 171 (2018), pp. 61–99, p. 70. 49 Marion, The Crossing of the Visible (cit. n. 1), p. 4. 50 Eric Newton: The relationship between form and content in the arts, Royal Institution of Great Britain, Weekly Evening Meeting, Friday 8th June, 1956, London 1957, pp. 1–7.
back to the  book Europäische Bild- und Buchkultur im 13. Jahrhundert"
Europäische Bild- und Buchkultur im 13. Jahrhundert