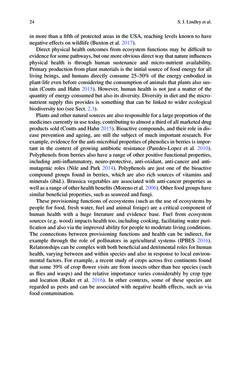 24 in more than a fifth of protected areas in the USA, reaching levels known to have negative effects on wildlife (Buxton et  al. 2017). Direct physical health outcomes from ecosystem functions may be difficult to evidence for some pathways, but one more obvious direct way that nature influences physical health is through human sustenance and micro-nutrient availability. Primary production from plant materials is the initial source of food energy for all living beings, and humans directly consume 25–50% of the energy embodied in plant-life even before considering the consumption of animals that plants also sus- tain (Coutts and Hahn 2015). However, human health is not just a matter of the quantity of energy consumed but also its diversity. Diversity in diet and the micro- nutrient supply this provides is something that can be linked to wider ecological biodiversity too (see Sect. 2.3). Plants and other natural sources are also responsible for a large proportion of the medicines currently in use today, contributing to almost a third of all marketed drug products sold (Coutts and Hahn 2015). Bioactive compounds, and their role in dis- ease prevention and ageing, are still the subject of much important research. For example, evidence for the anti-microbial properties of phenolics in berries is impor- tant in the context of growing antibiotic resistance (Paredes-Lopez et  al. 2010). Polyphenols from berries also have a range of other positive functional properties, including anti-inflammatory, neuro-protective, anti-oxidant, anti-cancer and anti- mutagenic roles (Nile and Park 2014). Polyphenols are just one of the bioactive compound groups found in berries, which are also rich sources of vitamins and minerals (ibid.). Brassica vegetables are associated with anti-cancer properties as well as a range of other health benefits (Moreno et  al. 2006). Other food groups have similar beneficial properties, such as seaweed and fungi. These provisioning functions of ecosystems (such as the use of ecosystems by people for food, fresh water, fuel and animal forage) are a critical component of human health with a huge literature and evidence base. Fuel from ecosystem sources (e.g. wood) impacts health too, including cooking, facilitating water puri- fication and also via the improved ability for people to moderate living conditions. The connections between provisioning functions and health can be indirect, for example through the role of pollinators in agricultural systems (IPBES 2016). Relationships can be complex with both beneficial and detrimental roles for human health, varying between and within species and also in response to local environ- mental factors. For example, a recent study of crops across five continents found that some 39% of crop flower visits are from insects other than bee species (such as flies and wasps) and the relative importance varies considerably by crop type and location (Rader et  al. 2016). In other contexts, some of these species are regarded as pests and can be associated with negative health effects, such as via food contamination. S. J. Lindley et al.
back to the  book Biodiversity and Health in the Face of Climate Change"
Biodiversity and Health in the Face of Climate Change