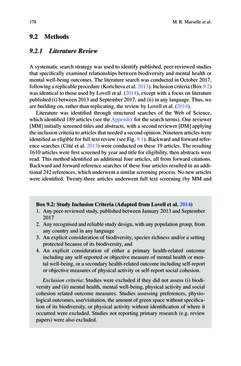 178 9.2 Methods 9.2.1 Literature Review A systematic search strategy was used to identify published, peer-reviewed studies that specifically examined relationships between biodiversity and mental health or mental well-being outcomes. The literature search was conducted in October 2017, following a replicable procedure (Koricheva et  al. 2013). Inclusion criteria (Box  9.2) was identical to those used by Lovell et  al. (2014), except with a focus on literature published (i) between 2013 and September 2017, and (ii) in any language. Thus, we are building on, rather than replicating, the review by Lovell et  al. (2014). Literature was identified through structured searches of the Web of Science, which identified 189 articles (see the Appendix for the search terms). One reviewer [MM] initially screened titles and abstracts, with a second reviewer [DM] applying the inclusion criteria to articles that needed a second opinion. Nineteen articles were identified as eligible for full text review (see Fig.  9.1). Backward and forward refer- ence searches (Cǒté et  al. 2013) were conducted on these 19 articles. The resulting 1610 articles were first screened by year and title for eligibility, then abstracts were read. This method identified an additional four articles, all from forward citations. Backward and forward reference searches of these four articles resulted in an addi- tional 242 references, which underwent a similar screening process. No new articles were identified. Twenty-three articles underwent full text screening (by MM and Box 9.2: Study Inclusion Criteria (Adapted from Lovell et  al. 2014) 1. Any peer-reviewed study, published between January 2013 and September 2017 2. Any recognised and reliable study design, with any population group, from any country and in any language 3. An explicit consideration of biodiversity, species richness and/or a setting protected because of its biodiversity, and 4. An explicit consideration of either a primary health-related outcome including any self-reported or objective measure of mental health or men- tal well-being, or a secondary health-related outcome including self-report or objective measures of physical activity or self-report social cohesion. Exclusion criteria: Studies were excluded if they did not assess (i) biodi- versity and (ii) mental health, mental well-being, physical activity and social cohesion related outcome measures. Studies assessing preferences, physio- logical outcomes, use/visitation, the amount of green space without specifica- tion of its biodiversity, or physical activity without identification of where it occurred were excluded. Studies not reporting primary research (e.g. review papers) were also excluded. M. R. Marselle et al.
back to the  book Biodiversity and Health in the Face of Climate Change"
Biodiversity and Health in the Face of Climate Change