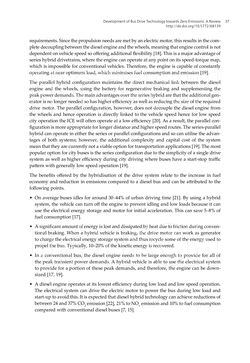 requirements. Since the propulsion needs are met by an electric motor, this results in the com- plete decoupling between the diesel engine and the wheels, meaning that engine control is not dependent on vehicle speed so offering additional flexibility [18]. This is a major advantage of series hybrid drivetrains, where the engine can operate at any point on its speed-torque map, which is impossible for conventional vehicles. Therefore, the engine is capable of constantly operating at near optimum load, which minimises fuel consumption and emission [19]. The parallel hybrid configuration maintains the direct mechanical link between the diesel engine and the wheels, using the battery for regenerative braking and supplementing the peak power demands. The main advantages over the series hybrid are that the additional gen- erator is no longer needed so has higher efficiency as well as reducing the size of the required drive motor. The parallel configuration, however, does not decouple the diesel engine from the wheels and hence operation is directly linked to the vehicle speed hence for low speed city operation the ICE will often operate at a low efficiency [20]. As a result, the parallel con- figuration is more appropriate for longer distance and higher speed routes. The series-parallel hybrid can operate in either the series or parallel configurations and so can utilise the advan- tages of both systems; however, the additional complexity and capital cost of the system mean that they are currently not a viable option for transportation applications [19]. The most popular option for city buses is the series configuration due to the simplicity of a single drive system as well as higher efficiency during city driving where buses have a start-stop traffic pattern with generally low speed operation [19]. The benefits offered by the hybridisation of the drive system relate to the increase in fuel economy and reduction in emissions compared to a diesel bus and can be attributed to the following points. • On average buses idles for around 30–44% of urban driving time [21]. By using a hybrid system, the vehicle can turn off the engine to prevent idling and low loads because it can use the electrical energy storage and motor for initial acceleration. This can save 5–8% of fuel consumption [17]. • A significant amount of energy is lost and dissipated by heat due to friction during conven- tional braking. When a hybrid vehicle is braking, the drive motor can work as generator to charge the electrical energy storage system and thus recycle some of the energy used to propel the bus. Typically, 10–20% of the kinetic energy is recovered. • In a conventional bus, the diesel engine needs to be large enough to provide for all of the peak transient power demands. A hybrid vehicle is able to use the electrical system to provide for a portion of these peak demands, and therefore, the engine can be down- sized [17, 19]. • A diesel engine operates at its lowest efficiency during low load and low speed operation. The electrical system can drive the electric motor to power the bus during low load and start-up to avoid this. It is expected that diesel hybrid technology can achieve reductions of between 24 and 37% CO2 emission [22], 21% to NOx emission and 10% to fuel consumption compared with conventional diesel buses [7, 15]. Development of Bus Drive Technology towards Zero Emissions: A Review http://dx.doi.org/10.5772/68139 37
back to the  book Hybrid Electric Vehicles"
Hybrid Electric Vehicles