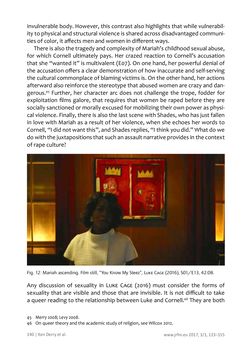 140 | Ken Derry et al. www.jrfm.eu 2017, 3/1, 123–155 invulnerable body. however, this contrast also highlights that while vulnerabil- ity to physical and structural violence is shared across disadvantaged communi- ties of color, it affects men and women in different ways. there is also the tragedy and complexity of Mariah’s childhood sexual abuse, for which Cornell ultimately pays. her crazed reaction to Cornell’s accusation that she “wanted it” is multivalent (e07). On one hand, her powerful denial of the accusation offers a clear demonstration of how inaccurate and self-serving the cultural commonplace of blaming victims is. On the other hand, her actions afterward also reinforce the stereotype that abused women are crazy and dan- gerous.45 further, her character arc does not challenge the trope, fodder for exploitation films galore, that requires that women be raped before they are socially sanctioned or morally excused for mobilizing their own power as physi- cal violence. Finally, there is also the last scene with Shades, who has just fallen in love with Mariah as a result of her violence, when she echoes her words to Cornell, “i did not want this”, and shades replies, “i think you did.” What do we do with the juxtapositions that such an assault narrative provides in the context of rape culture? Any discussion of sexuality in Luke Cage (2016) must consider the forms of sexuality that are visible and those that are invisible. It is not difficult to take a queer reading to the relationship between Luke and Cornell.46 they are both 45 Merry 2008; Levy 2008. 46 On queer theory and the academic study of religion, see Wilcox 2012. Fig. 12: Mariah ascending. Film still, “You Know My Steez”, Luke Cage (2016), S01/E13, 42:08.
back to the  book JRFM - Journal Religion Film Media, Volume 03/01"
JRFM Journal Religion Film Media, Volume 03/01