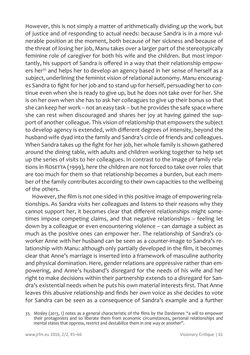 Visionary Critique | 61www.jrfm.eu 2016, 2/2, 45–66 However, this is not simply a matter of arithmetically dividing up the work, but of justice and of responding to actual needs: because Sandra is in a more vul- nerable position at the moment, both because of her sickness and because of the threat of losing her job, Manu takes over a larger part of the stereotypically feminine role of caregiver for both his wife and the children. But most impor- tantly, his support of Sandra is offered in a way that their relationship empow- ers her35 and helps her to develop an agency based in her sense of herself as a subject, underlining the feminist vision of relational autonomy. Manu encourag- es Sandra to fight for her job and to stand up for herself, persuading her to con- tinue even when she is ready to give up, but he does not take over for her. She is on her own when she has to ask her colleagues to give up their bonus so that she can keep her work – not an easy task – but he provides the safe space where she can rest when discouraged and shares her joy at having gained the sup- port of another colleague. This vision of relationship that empowers the subject to develop agency is extended, with different degrees of intensity, beyond the husband-wife dyad into the family and Sandra’s circle of friends and colleagues. When Sandra takes up the fight for her job, her whole family is shown gathered around the dining table, with adults and children working together to help set up the series of visits to her colleagues. In contrast to the image of family rela- tions in Rosetta (1999), here the children are not forced to take over roles that are too much for them so that relationship becomes a burden, but each mem- ber of the family contributes according to their own capacities to the wellbeing of the others. However, the film is not one-sided in this positive image of empowering rela- tionships. As Sandra visits her colleagues and listens to their reasons why they cannot support her, it becomes clear that different relationships might some- times impose competing claims, and that negative relationships – feeling let down by a colleague or even encountering violence – can damage a subject as much as the positive ones can empower her. The relationship of Sandra’s co- worker Anne with her husband can be seen as a counter-image to Sandra’s re- lationship with Manu: although only partially developed in the film, it becomes clear that Anne’s marriage is inserted into a framework of masculine authority and physical domination. Here, gender relations are oppressive rather than em- powering, and Anne’s husband’s disregard for the needs of his wife and her right to make decisions within their partnership extends to a disregard for San- dra’s existential needs when he puts his own material interests first. That Anne leaves this abusive relationship and finds her own voice as she decides to vote for Sandra can be seen as a consequence of Sandra’s example and a further 35 Mosley (2013, 1) notes as a general characteristic of the films by the Dardennes “a will to empower their protagonists and so liberate them from economic circumstances, personal relationships and mental states that oppress, restrict and destabilize them in one way or another”.
back to the  book JRFM - Journal Religion Film Media, Volume 02/02"
JRFM Journal Religion Film Media, Volume 02/02