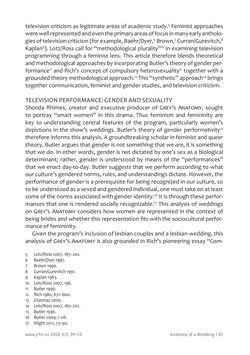 Anatomy of a Wedding | 41www.jrfm.eu 2018, 4/2, 39–53 television criticism as legitimate areas of academic study.5 Feminist approaches were well represented and even the primary areas of focus in many early antholo- gies of television criticism (for example, Baehr/Dyer,6 Brown,7 Curran/Gurevitch,8 Kaplan9). Lotz/Ross call for “methodological plurality”10 in examining television programming through a feminist lens. This article therefore blends theoretical and methodological approaches by incorporating Butler’s theory of gender per- formance11 and Rich’s concept of compulsory heterosexuality12 together with a grounded theory methodological approach.13 This “synthetic” approach14 brings together communication, feminist and gender studies, and television criticism. TELEVISION PERFORMANCE: GENDER AND SEXUALITY Shonda Rhimes, creator and executive producer of Grey’s Anatomy, sought to portray “smart women” in this drama. Thus feminism and femininity are key to understanding central features of the program, particularly women’s depictions in the show’s weddings. Butler’s theory of gender performativity15 therefore informs this analysis. A groundbreaking scholar in feminist and queer theory, Butler argues that gender is not something that we are, it is something that we do. In other words, gender is not dictated by one’s sex as a biological determinant; rather, gender is understood by means of the “performances” that we enact day-to-day. Butler suggests that we perform according to what our culture’s gendered norms, rules, and understandings dictate. However, the performance of gender is a prerequisite for being recognized in our culture, so to be understood as a sexed and gendered individual, one must take on at least some of the norms associated with gender identity.16 It is through these perfor- mances that one is rendered socially recognizable.17 This analysis of weddings on Grey’s Anatomy considers how women are represented in the context of being brides and whether this representation fits with the sociocultural perfor- mance of femininity. Given the program’s inclusion of lesbian couples and a lesbian wedding, this analysis of Grey’s Anatomy is also grounded in Rich’s pioneering essay “Com- 5 Lotz/Ross 2007, 185–202. 6 Baehr/Dyer 1987. 7 Brown 1990. 8 Curran/Gurevitch 1991. 9 Kaplan 1983. 10 Lotz/Ross 2007, 196. 11 Butler 1990. 12 Rich 1980, 631–660. 13 Charmaz 2006. 14 Lotz/Ross 2007, 185–202. 15 Butler 1990. 16 Butler 2009, i–xiii. 17 Wight 2011, 73–90.
back to the  book JRFM - Journal Religion Film Media, Volume 04/02"
JRFM Journal Religion Film Media, Volume 04/02