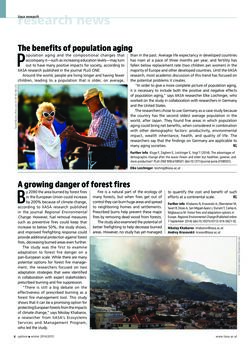 research news 4 options + winter 2014/2015 www.iiasa.ac.at iiasa research Population aging and the compositional changes that accompany it—such as increasing education levels—may turn out to have many positive impacts for society, according to IIASA research published in the journal PLoS ONE. Around the world, people are living longer and having fewer children, leading to a population that is older, on average, than  in the past. Average life expectancy in developed countries has risen at a pace of three months per year, and fertility has fallen below replacement rate (two children per women) in the majority of Europe and other developed countries. Until the IIASA research, most academic discussion of this trend has focused on the potential problems it creates. “In order to give a more complete picture of population aging, it is necessary to include both the positive and negative effects of population aging,” says IIASA researcher Elke Loichinger, who worked on the study in collaboration with researchers in Germany and the United States. The researchers chose to use Germany as a case study because the country has the second oldest average population in the world, after Japan. They found five areas in which population aging could bring net benefits, when considered in combination with other demographic factors: productivity, environmental impact, wealth inheritance, health, and quality of life. The researchers say that the findings on Germany are applicable to many aging societies. KL Further info Kluge F, Zagheni E, Loichinger E, Vogt  T (2014). The advantages of demographic change after the wave: Fewer and older but healthier, greener, and more productive? PLoS ONE 9(9):e108501 [doi:10.1371/journal.pone.0108501]. Elke Loichinger loiching@iiasa.ac.at By 2090 the area burned by forest fires in the European Union could increase by 200% because of climate change, according to IIASA research published in the journal Regional Environmental Change. However, fuel removal measures such as preventive fires could keep that increase to below 50%, the study shows, and improved firefighting response could provide additional protection against forest fires, decreasing burned areas even further. The study was the first to examine adaptation to forest fire danger on a pan-European scale. While there are many potential options for forest fire manage- ment, the researchers focused on two adaptation strategies that were identified in collaboration with expert stakeholders: prescribed burning and fire suppression. “There is still a big debate on the effectiveness of prescribed burning as a forest fire management tool. This study shows that it can be a promising option for protecting European forests from the impacts of climate change,” says  Nikolay  Khabarov, a  researcher from IIASA’s Ecosystems Services and Management Program, who  led the study. Fire is a natural part of the ecology of many forests, but when fires get out of control they can burn huge areas and spread to neighboring homes and settlements. Prescribed burns help prevent these major fires by removing dead wood from forests. The study also examined the potential of better firefighting to help decrease burned areas. However, no study has yet managed to quantify the cost and benefit of such efforts at a continental scale. KL Further info Khabarov N, Krasovskii A, Obersteiner M, Swart R, Dosio A, San-Miguel-Ayanz J, Durrant T, Camia  A, Migliavacca M. Forest fires and adaptation options in Europe. Regional Environmental Change (Published online 7 September 2014) [doi:10.1007/s10113-014-0621-0]. Nikalay Khabarov khabarov@iiasa.ac.at Andrey Krasovskii krasov@iiasa.ac.at A growing danger of forest fires The benefits of population aging
back to the  book options, Volume winter 2014/2015"
options Volume winter 2014/2015