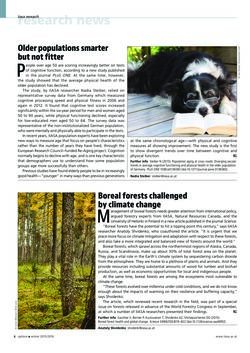 research news 4 options + winter 2015/2016 www.iiasa.ac.at iiasa research Older populations smarter but not fitter People over age 50 are scoring increasingly better on tests of cognitive function, according to a new study published in the journal PLoS ONE. At the same time, however, the study showed that the average physical health of the older  population  has declined. The study, by IIASA researcher Nadia Steiber, relied on representative survey data from Germany which measured cognitive processing speed and physical fitness in 2006 and again in 2012. It found that cognitive test scores increased significantly within the six-year period for men and women aged 50 to 90 years, while physical functioning declined, especially for low-educated men aged 50 to 64. The survey data was representative of the non-institutionalized German population, who were mentally and physically able to participate in the tests. In recent years, IIASA population experts have been exploring new ways to measure age that focus on people’s characteristics rather than the number of years they have lived, through the European Research Council–funded Re-Aging project. Cognition normally begins to decline with age, and is one key characteristic that demographers use to understand how some population groups age more successfully than others. Previous studies have found elderly people to be in increasingly good health—”younger” in many ways than previous generations at the same chronological age—with physical and cognitive measures all showing improvement. The new study is the first to show divergent trends over time between cognitive and physical  function. KL Further info Steiber N (2015). Population aging at cross-roads: Diverging secular trends in average cognitive functioning and physical health in the older population of Germany. PLoS ONE 10(8):e0136583 [doi:10.1371/journal.pone.0136583]. Nadia Steiber steiber@iiasa.ac.at Boreal forests challenged by  climate  change Management of boreal forests needs greater attention from international policy, argued forestry experts from IIASA, Natural Resources Canada, and the University  of Helsinki in Finland in a new  article published in the journal Science. “Boreal forests have the potential to hit a tipping point this century,” says IIASA researcher Anatoly Shvidenko, who coauthored the article. “It is urgent that we place more focus on climate mitigation and adaptation with respect to these forests, and also take a more integrated and balanced view of forests around the world.” Boreal forests, which sprawl across the northernmost regions of Alaska, Canada, Russia, and Scandinavia, make up about 30% of total forest area on the planet. They  play a vital role in the Earth’s climate system by sequestering carbon dioxide from the atmosphere. They are home to a plethora of plants and animals. And they provide resources including substantial amounts of wood for lumber and biofuel production, as well as economic opportunities for local and indigenous people. At the same time, boreal forests are among the ecosystems most vulnerable to climate  change. “These forests evolved over millennia under cold conditions, and we do not know enough about the impacts of warming on their resilience and buffering capacity,” says  Shvidenko. The article, which reviewed recent research in the field, was part of a special issue on forests released in advance of the World Forestry Congress in September, at which a number of IIASA researchers presented their findings. KL Further info Gauthier S, Bernier P, Kuuluvainen T, Shvidenko AZ, Shchepaschenko DG (2015). Boreal forest health and global change. Science 349(6250):819–822 [doi:10.1126/science.aaa9092]. Anatoly Shvidenko shvidenk@iiasa.ac.at
back to the  book options, Volume winter 2015/2016"
options Volume winter 2015/2016