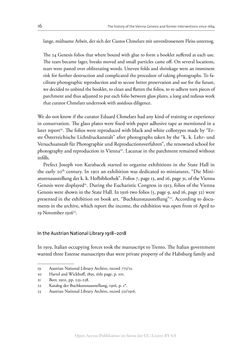 16 The history of the Vienna Genesis and former interventions since 1664 lange, mühsame Arbeit, der sich der Custos Chmelarz mit unverdrossenem Fleiss unterzog. The 24 Genesis folios that where bound with glue to form a booklet suffered at each use. The tears became lager, breaks moved and small particles came off. On several locations, tears were pasted over obliterating words. Uneven folds and shrinkage were an imminent risk for further destruction and complicated the procedure of taking photographs. To fa- cilitate photographic reproduction and to secure better preservation and use for the future, we decided to unbind the booklet, to clean and flatten the folios, to re-adhere torn pieces of parchment and thus adjusted to put each folio between glass plates, a long and tedious work that curator Chmelarz undertook with assidous diligence. We do not know if the curator Eduard Chmelarz had any kind of training or experience in conservation. The glass plates were fixed with paper adhesive tape as mentioned in a later report19. The folios were reproduced with black and white collotypes made by “Er- ste Österreichische Lichtdruckanstalt” after photographs taken by the “k. k. Lehr- und Versuchsanstalt für Photographie und Reproductionsverfahren”, the renowned school for photography and reproduction in Vienna20. Lacunae in the parchment remained without infills. Prefect Joseph von Karabacek started to organise exhibitions in the State Hall in the early 20th century. In 1901 an exhibition was dedicated to miniatures, “Die Mini- aturenausstellung der k. k. Hofbibliothek”. Folios 7, page 13, and 16, page 31, of the Vienna Genesis were displayed21. During the Eucharistic Congress in 1913, folios of the Vienna Genesis were shown in the State Hall. In 1916 two folios (5, page 9, and 16, page 32) were presented in the exhibition on book art, “Buchkunstausstellung”22. According to docu- ments in the archive, which report the income, the exhibition was open from 16 April to 19 November 191623. In the Austrian National Library 1918–2018 In 1919, Italian occupying forces took the manuscript to Trento. The Italian government wanted three Estense manuscripts that were private property of the Habsburg family and 19 Austrian National Library Archive, record 775/21. 20 Hartel and Wickhoff, 1895, title page, p. 101. 21 Beer, 1902, pp. 233–238. 22 Katalog der Buchkunstausstellung, 1916, p. 1*. 23 Austrian National Library Archive, record 521/1916. Open-Access-Publikation im Sinne der CC-Lizenz BY 4.0
back to the  book The Vienna Genesis - Material analysis and conservation of a Late Antique illuminated manuscript on purple parchment"
The Vienna Genesis Material analysis and conservation of a Late Antique illuminated manuscript on purple parchment