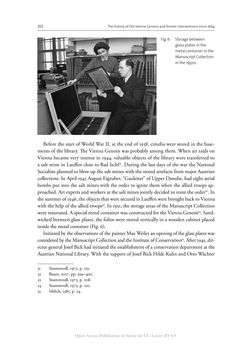 20 The history of the Vienna Genesis and former interventions since 1664 Before the start of World War II, at the end of 1938, cimelia were stored in the base- ments of the library. The Vienna Genesis was probably among them. When air raids on Vienna became very intense in 1944, valuable objects of the library were transferred to a salt mine in Lauffen close to Bad Ischl31. During the last days of the war the National Socialists planned to blow up the salt mines with the stored artefacts from major Austrian collections. In April 1945 August Eigruber, “Gauleiter” of Upper Danube, had eight aerial bombs put into the salt mines with the order to ignite them when the allied troops ap- proached. Art experts and workers at the salt mines jointly decided to resist the order32. In the summer of 1946, the objects that were secured in Lauffen were brought back to Vienna with the help of the allied troops33. In 1951, the storage areas of the Manuscript Collection were renovated. A special metal container was constructed for the Vienna Genesis34. Sand- wiched between glass plates, the folios were stored vertically in a wooden cabinet placed inside the metal container (Fig. 6). Initiated by the observations of the painter Max Weiler an opening of the glass plates was considered by the Manuscript Collection and the Institute of Conservation35. After 1945, dir- ector general Josef Bick had initiated the establishment of a conservation department at the Austrian National Library. With the support of Josef Bick Hilde Kuhn and Otto Wächter 31 Stummvoll, 1973, p. 119. 32 Bauer, 2017, pp. 399–400. 33 Stummvoll, 1973, p. 208. 34 Stummvoll, 1973, p. 210. 35 Irblich, 1985, p. 24. Fig. 6: Storage between glass plates in the metal container in the Manuscript Collection in the 1950s. Open-Access-Publikation im Sinne der CC-Lizenz BY 4.0
back to the  book The Vienna Genesis - Material analysis and conservation of a Late Antique illuminated manuscript on purple parchment"
The Vienna Genesis Material analysis and conservation of a Late Antique illuminated manuscript on purple parchment