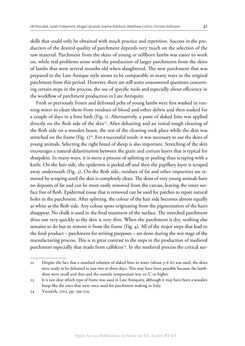 Jiří Vnouček, Sarah Fiddyment, Abigail Quandt, Sophie Rabitsch, Matthew Collins, Christa Hofmann 41 skills that could only be obtained with much practice and repetition. Success in the pro- duction of the desired quality of parchment depends very much on the selection of the raw material. Parchment from the skins of young or stillborn lambs was easier to work on, while real problems arose with the production of larger parchments from the skins of lambs that were several months old when slaughtered. The new parchment that was prepared in the Late Antique style seems to be comparable in many ways to the original parchment from this period. However, there are still some unanswered questions concern- ing certain steps in the process, the use of specific tools and especially about efficiency in the workflow of parchment production in Late Antiquity. Fresh or previously frozen and defrosted pelts of young lambs were first washed in run- ning water to clean them from residues of blood and other debris and then soaked for a couple of days in a lime bath (Fig. 1). Alternatively, a paste of slaked lime was applied directly on the flesh side of the skin22. After dehairing and an initial rough cleaning of the flesh side on a wooden beam, the rest of the cleaning took place while the skin was stretched on the frame (Fig. 2)23. For a successful result, it was necessary to use the skins of young animals. Selecting the right breed of sheep is also important. Stretching of the skin encourages a natural delamination between the grain and corium layers that is typical for sheepskin. In many ways, it is more a process of splitting or peeling than scraping with a knife. On the hair side, the epidermis is peeled off and then the papillary layer is scraped away underneath (Fig. 3). On the flesh side, residues of fat and other impurities are re- moved by scraping until the skin is completely clean. The skins of very young animals have no deposits of fat and can be more easily removed from the carcass, leaving the inner sur- face free of flesh. Epidermal tissue that is removed can be used for patches to repair natural holes in the parchment. After splitting, the colour of the hair side becomes almost equally as white as the flesh side. Any colour spots originating from the pigmentation of the hairs disappear. No chalk is used in the final treatment of the surface. The stretched parchment dries out very quickly as the skin is very thin. When the parchment is dry, nothing else remains to do but to remove it from the frame (Fig. 4). All of the major steps that lead to the final product – parchment for writing purposes – are done during the wet stage of the manufacturing process. This is in great contrast to the steps in the production of medieval parchment especially that made from calfskins24. In the medieval process the critical sur- 22 Despite the fact that a standard solution of slaked lime in water (about 5–6 %) was used, the skins were ready to be dehaired in just two or three days. This may have been possible because the lamb- skins were small and thin and the outside temperature was 20 °C or higher. 23 It is not clear which type of frame was used in Late Antiquity, although it may have been a wooden hoop like the ones that were once used for parchment making in Italy. 24 Vnouček, 2012, pp. 199-229. Open-Access-Publikation im Sinne der CC-Lizenz BY 4.0
back to the  book The Vienna Genesis - Material analysis and conservation of a Late Antique illuminated manuscript on purple parchment"
The Vienna Genesis Material analysis and conservation of a Late Antique illuminated manuscript on purple parchment