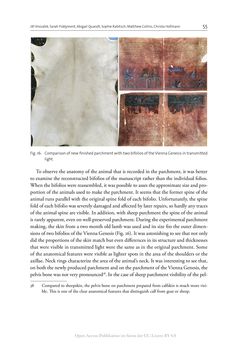 Jiří Vnouček, Sarah Fiddyment, Abigail Quandt, Sophie Rabitsch, Matthew Collins, Christa Hofmann 55 To observe the anatomy of the animal that is recorded in the parchment, it was better to examine the reconstructed bifolios of the manuscript rather than the individual folios. When the bifolios were reassembled, it was possible to asses the approximate size and pro- portion of the animals used to make the parchment. It seems that the former spine of the animal runs parallel with the original spine fold of each bifolio. Unfortunately, the spine fold of each bifolio was severely damaged and affected by later repairs, so hardly any traces of the animal spine are visible. In addition, with sheep parchment the spine of the animal is rarely apparent, even on well-preserved parchment. During the experimental parchment making, the skin from a two month old lamb was used and its size fits the outer dimen- sions of two bifolios of the Vienna Genesis (Fig. 16). It was astonishing to see that not only did the proportions of the skin match but even differences in its structure and thicknesses that were visible in transmitted light were the same as in the original parchment. Some of the anatomical features were visible as lighter spots in the area of the shoulders or the axillae. Neck rings characterize the area of the animal’s neck. It was interesting to see that, on both the newly produced parchment and on the parchment of the Vienna Genesis, the pelvis bone was not very pronounced38. In the case of sheep parchment visibility of the pel- 38 Compared to sheepskin, the pelvis bone on parchment prepared from calfskin is much more visi- ble. This is one of the clear anatomical features that distinguish calf from goat or sheep. Fig. 16: Comparison of new finished parchment with two bifolios of the Vienna Genesis in transmitted light. Open-Access-Publikation im Sinne der CC-Lizenz BY 4.0
back to the  book The Vienna Genesis - Material analysis and conservation of a Late Antique illuminated manuscript on purple parchment"
The Vienna Genesis Material analysis and conservation of a Late Antique illuminated manuscript on purple parchment