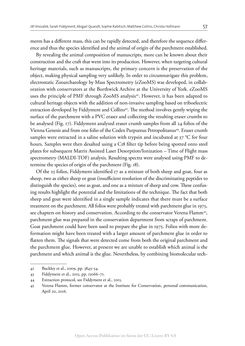 Jiří Vnouček, Sarah Fiddyment, Abigail Quandt, Sophie Rabitsch, Matthew Collins, Christa Hofmann 57 ments has a different mass, this can be rapidly detected, and therefore the sequence differ- ence and thus the species identified and the animal of origin of the parchment established. By revealing the animal composition of manuscripts, more can be known about their construction and the craft that went into its production. However, when targeting cultural heritage materials, such as manuscripts, the primary concern is the preservation of the object, making physical sampling very unlikely. In order to circumnavigate this problem, electrostatic Zooarchaeology by Mass Spectrometry (eZooMS) was developed, in collab- oration with conservators at the Borthwick Archive at the University of York. eZooMS uses the principle of PMF through ZooMS analysis42. However, it has been adapted to cultural heritage objects with the addition of non-invasive sampling based on triboelectric extraction developed by Fiddyment and Collins43. The method involves gently wiping the surface of the parchment with a PVC eraser and collecting the resulting eraser crumbs to be analysed (Fig. 17). Fiddyment analysed eraser crumb samples from all 24 folios of the Vienna Genesis and from one folio of the Codex Purpureus Petropolitanus44. Eraser crumb samples were extracted in a saline solution with trypsin and incubated at 37 °C for four hours. Samples were then desalted using a C18 filter tip before being spotted onto steel plates for subsequent Matrix Assisted Laser Desorption/Ionization – Time of Flight mass spectrometry (MALDI-TOF) analysis. Resulting spectra were analysed using PMF to de- termine the species of origin of the parchment (Fig. 18). Of the 25 folios, Fiddyment identified 17 as a mixture of both sheep and goat, four as sheep, two as either sheep or goat (insufficient resolution of the discriminating peptides to distinguish the species), one as goat, and one as a mixture of sheep and cow. These confus- ing results highlight the potential and the limitations of the technique. The fact that both sheep and goat were identified in a single sample indicates that there must be a surface treatment on the parchment. All folios were probably treated with parchment glue in 1975, see chapters on history and conservation. According to the conservator Verena Flamm45, parchment glue was prepared in the conservation department from scraps of parchment. Goat parchment could have been used to prepare the glue in 1975. Folios with more de- formation might have been treated with a larger amount of parchment glue in order to flatten them. The signals that were detected come from both the original parchment and the parchment glue. However, at present we are unable to establish which animal is the parchment and which animal is the glue. Nevertheless, by combining biomolecular tech- 42 Buckley et al., 2009, pp. 3843–54. 43 Fiddyment et al., 2015, pp. 15066–71. 44 Extraction protocol, see Fiddyment et al., 2015. 45 Verena Flamm, former conservator at the Institute for Conservation, personal communication, April 20, 2016. Open-Access-Publikation im Sinne der CC-Lizenz BY 4.0
back to the  book The Vienna Genesis - Material analysis and conservation of a Late Antique illuminated manuscript on purple parchment"
The Vienna Genesis Material analysis and conservation of a Late Antique illuminated manuscript on purple parchment